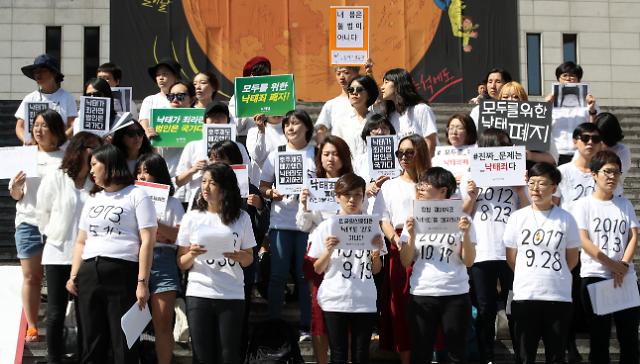 A petition to legalize abortion received support from a majority of South Koreans, especially young people in their 20s and 30s, reflecting a change in social attitudes toward the divisive issue, according to a survey.

Pollster Realmeter found in a survey of 516 adults that 51.9 percent sided with a petition calling for the abolishment of a law banning abortion while 36.2 percent supported it.

The law allows abortions for victims of rape or incest, women whose health is at risk, cases where the fetus is suspected of having a genetic disorder, and pregnant women or their spouses who suffer from communicable or hereditary diseases.

Although abortion is illegal, it is actually very common. Women who have Illegal operations can receive a jail term of up to one year or a fine of up to two million won (1,770 US dollars), while doctors can be jailed for up to two years.

The window for public petitions at the presidential website has been flooded with more than 200,000 endorsors as of Monday since the first petition calling for the legitimation of abortion and drugs used for miscarriage was posted on September 30.

Although abortion is illegal, it is actually very common.  Moon's office has vowed to give an answer about the controversial issue if the number of signatories exceeds 200,000. The first petitioner insisted South Korea should also allow the sale of drugs used to induce spontaneous abortions to prevent unwanted birth.