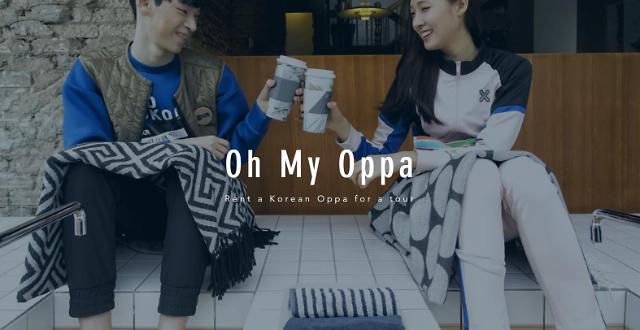 
SEOUL -- "Oppa" is a Korean term which has been known globally since rapper Psy's megahit song "Gangnam Style" was released in 2012. Included in the chorus of his song, billions of people have shouted it.

Oppa literally means a biological older brother, but it is an affectionate term used by girls to address older boyfriends. Psy portrayed himself as a Gangnam style Oppa. Gangnam is an upscale region in southern Seoul, and a Gangnam style Oppa is seen as good-looking and stylish.

Six years later, a special spring ad posted by Oh My Oppa, a Seoul-based tour service startup, offers Oppas for rent mainly to attract female tourists who dream of a sweet, relaxed stroll through a tunnel of cherry blossoms, an eccentric tour of marketplaces in search for Korean delicacies, or trips to the scenes which may have popped up in K-pop dramas.

A bunch of handsome Oh My Oppas in their 20s and early 30s are all ready to fulfill their duty as personal tour guides. "Our tour service provides them with unique memories which they will never forget," Oh My Oppa's public relations manager Huh Jung-moon told Aju News.


They are all amateur tour guides who are fluent in foreign languages such as English and Chinese and have a good educational background and expertise in architecture, food and culture.

"The main mission of our tour service is to provide friendly and comfortable 'tour mates' to foreign visitors," Huh said, adding Oppas will guide tourists to unique places which are not included in other ordinary city tours.

The website of Huh's company put up the portraits of seven Oppas, including William Oppa who is described as ideal for those who lust for delicious Korean food. William sets his partners free of worrying about consuming high-calorie food because he will guide them to walking courses such as a 10 kilometer (6.2 miles)-long stream which flows through the heart of Seoul.

For tourists interested in a romantic walk through a beautiful maze of alleys between traditional Korean mansions, Hue is perfect. "Do you need rest in calm and peaceful places in the midst of the crazy-busy city?," he asks, recommending trips to a beautiful temple garden and historical relics.


After a three-month test service from December last year, the startup officially launched its service on April 1. "During our test period, visitors from Taiwan, Hong Kong, Indonesia, Malaysia and Vietnam have traveled with Oppas," Huh said.

She said the Oh My Oppa service appealed to those from the countries where K-pop has a strong influence. "Originally, we had thought female tourists will be our main clients but there were also some men."

Tao Huanxin, a Taiwanese tourist who rent an Oppa, said in a review on Facebook that it was very nice to be guided to special places which only Koreans would know. Tao said she would definitely use Oppa tour guides again the next time she visits South Korea.

As yet, tours are available only in Seoul and guide fees depend on consumed time. As the service gained popularity on the internet, concerns were voiced over possible male escorts, but Huh stressed in an emphatic tone that such things would never happen.

"The tour guides are hand-picked through tests and interviews based on their character and language skills," she said, adding her company prohibits Oppas from drinking alcohol during their tour schedule or having nonoccupational private contact.

To provide better tour experience in the future, Oh My Oppa plans to release a smartphone app, increase the number of tour guides, and provide diversified programs including trips outside Seoul.