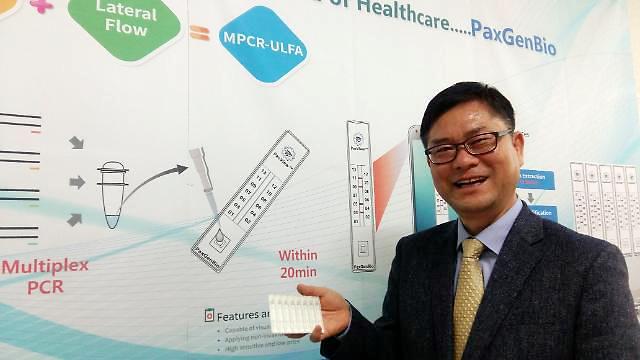 
SUWON -- Established in 2015 as one of South Korea's emerging biotech startups, PaxGenBio has produced test kits for early detection of pathogens and gene mutation as a life science company with distinctive technology and management philosophy.

Three years later, its name and products targeting hospitals and public health centers are still unfamiliar at home, but it has gradually gained recognition from specialists, probably better known among overseas clients looking for reliable and good things.

Confident of a high level of technology and price competitiveness, PaxGenBio head Park Young-Suk portrayed a big picture to nurture his company into a global player capable of producing accurate and affordable molecular diagnostic kits.

"The greatest strength of our company is that we have original technologies," Park said in an interview with Aju News from his office at the business incubation center of Kyonggi University in Suwon, about 40 kilometers (24 miles) south of Seoul.

PaxGenBio's diagnostic fusion technology uses human samples such as urine or sputum (phlegm) that can be easily taken. Typical applications include diagnosis of cervical cancer, tuberculosis, and other infections by viruses and bacteria. Consumers are hospitals and public health centers.

"Our vision is to build a global powerhouse in the field of in vitro diagnosis based on new technology and competitive products," Park said, referring to his technology called MPCR-ULFA (multiplex polymerase chain reaction-universal lateral flow assay). Five original technologies are patented or patent-pending in South Korea and one of them awaits a patent decision in the United States, China, India and Europe.

The strength of Park's technology has unlimited potential in the market mainly because of a competitive price. By using universal rapid diagnostic technology, reagents can be supplied at a price one-third lower than that of Roche, a global leader in molecular diagnostics, and at a price one-half that of Seegene, a domestic rival. Equipment used is less than one-tenth of the existing price.

MPCR-ULFA developed by PaxGenBio with an input of 1.5 billion won ($1.38 million) for the past two years can reduce the time required to confirm diagnosis results by 12/1, compared to the conventional electrophoresis method which takes about two hours to get diagnosis results. Using MPCR-ULFA, results can be obtained in about ten minutes and no equipment is needed to verify.

PaxGenBio's exceptional technology captures the hearts of people. After a good response in Vietnam last year, the company secured a series of sales contracts this year from clients in Indonesia and Poland. For its full-scale promotion abroad, the company plans to establish distributors in Southeast Asian countries like Thailand and Malaysia and in European countries such as Hungary, the Czech Republic and Turkey.

PaxGenBio is a combination of Pax (peace), Gen (generation), and Bio (biotechnology). Park's unique management philosophy can be seen well in a message posted on the company's website that reads "The mission of the company is to pursue peace and happiness for all humanity by making accurate diagnosis possible."

As a company with a short three-year career, it is still premature to talk about "global leadership" or "human peace", but it never sounds like nonsense because of Park's career. He is a molecular diagnostic specialist who has endeavored for the past 25 years since 1993 to research and commercialize molecular diagnostics.

"Biotechnology must be studied and made patiently with human heads and hands. Staff turnover rates should be low. You must be happy to have a low turnover rate," Park said. "People are the most crucial asset. When you create a culture that values people and communicates, sales come naturally."

Park, who likes the words of harmony and creativity, aims to list his company on KOSDAQ, the South Korean version of NASDAQ, in 2022. "A strong and dynamic organization based on accumulated technology and experience, coupled with organic collaboration through a network of experts in each field is the driving force of our growth," he said.

Like Samsung which has "Samsung Way" and LG which has "LG Way," Park's company has "PaxGenBio Way" that calls for contribution to the health and peace of humankind. It also emphasizes unison and harmony as well as responsibility and creative thinking based on self-leadership.

Park calls himself a "representative employee" that reflects his sincerity to become a business head who is always ready to read the minds of employees. "Chimera" was selected as an image symbolizing his company. Chimera refers to a cell, nucleus, chromosome, or gene-containing entity derived from two or more genetically different organisms. In short, it means a company which focuses on convergence technology.

This story was contributed by Kim Jung-geon, a senior Aju Business Daily writer based in Suwon, and edited by Lim Chang-won.