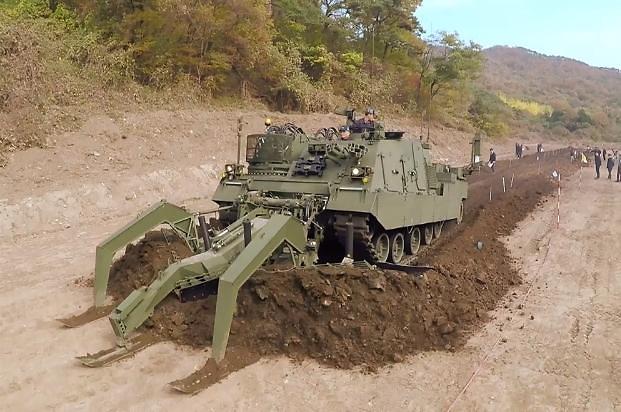 Hyundai Rotem, a subsidiary of the Hyundai auto group, said Monday in a statement that the green light from the Defense Acquisition Program Administration (DAPA) would pave the way for the mass production and combat operation of its new mine clearing tank equipped with a large plow on its front.

The plow can excavate the ground, exposing any mines or turning them upside down to open a safe aisle, the company said, adding it is capable of disarming magnetic mines by launching a magnetic field.

From the left and right of the rear, marking rods can be fired and a separate excavating bucket or crusher can be installed on its top to destroy obstacles such as trenches and barriers and lift and transport heavy equipment and materials.

The development of South Korea's first mine destroying tank with excellent protection and survivability began in 2014. Hyundai Rotem said it would develop an unmanned remote control system to run the mine destroyer from a safety zone up to five kilometers away.
DAPA's evaluation came after South and North Korean leaders agreed in April to cease all acts of hostilities against the other side and turn the demilitarized zone (DMZ), which bisects the Korean peninsula, into a genuine peace zone.
In early June, South Korean President Moon Jae-in called for an inter-Korean operation to excavate the remains of soldiers killed in the 1950-53 Korean War in the DMZ, which is a four-kilometer-wide strip of land.

The South's defense ministry estimates more than 800,000 mines have been buried in and along the perimeter of the zone.