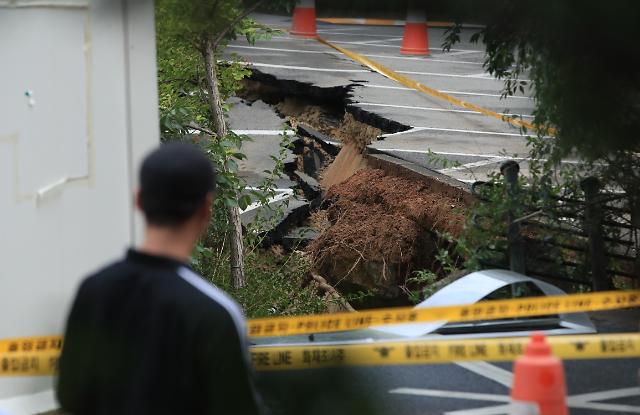 SEOUL -- A big sinkhole forced a pre-dawn evacuation of hundreds of frightened citizens in a residential area in southwestern Seoul amid fears that their apartment building could be toppled over to its side.

The sinkhole, about 30 meters (98 feet) wide and six meters deep, was created between an apartment complex and a construction site in Gasan-dong at about 4:30 a.m. (1930 GMT) on Friday. The area has been battered by torrential rains for five days. In urban areas, heavy rainfalls sometimes cause sinkholes under the ground covered by asphalt or concrete.

"I woke up to a sound of something breaking apart. Soon firefighters banged on my door and urged my family to escape," Knight Templar, a user of South Korea's online community Clien, said in a post uploaded on Friday, adding his family was out just with phones and wallets.

"Firefighters said our building was tilting to its side by about five degrees," the user said, adding the hole damaged four cars. An official probe is underway to see if residents can go back to their homes.