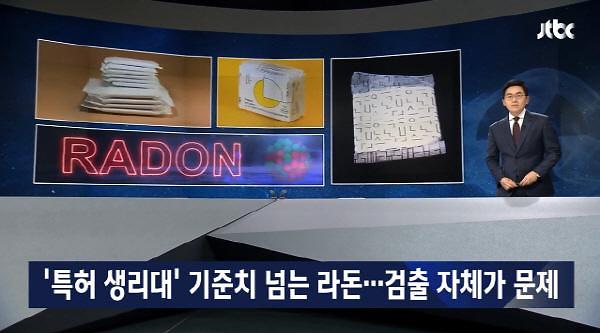 
SEOUL -- A fresh health scare erupted among South Korean women over the safety of organic hygiene products following news reports that sanitary pads produced by a domestic company were found to have contained a high level of radon, a cancer-causing radioactive material.

Organic cotton cover sanitary pads produced by Daily Habit became a hot issue Wednesday in online communities for women, prompting the company to post an evident notice on its website that its products are safe and contained a very low level of harmful substances.

JTBC, a subscription network and broadcasting company, reported a day earlier that the level of radon discovered from Daily Habit's sanitary pads was far above permissible standards. It quoted a health expert as saying the sanitary pads in question could cause skin cancer or other types of cancer specific to women.

Radon is a radioactive, colorless, odorless, tasteless noble gas which is considered a health hazard. According to the U.S. Environmental Protection Agency, radon is the second most frequent cause of lung cancer, after cigarette smoking.

Last year, the Ministry of Food and Drug Safety launched an inspection of sanitary pads sold in South Korea after Klean Nara, a popular producer of hygienic products, recalled sanitary napkins on complaints about negative side effects caused by volatile organic compounds (VOCs) which like benzene and formaldehyde are organic chemicals that easily become vapors or gases.

Thousands of women have filed a class-action suit, based on a study by some civilian experts that Klean Nara products contained unusually high VOC contents. A month later, the ministry concluded that sanitary pads contained a low level of toxic chemicals. Daily Habit's products have gained popularity for using organic materials.

This year, Daejin Bed recalled radon mattresses which used monazite, a reddish-brown phosphate mineral containing rare-earth metals. The inner covers of Daejin mattresses were coated with negative ion powder identified as monazite, which is radioactive due to the presence of thorium and, less commonly, uranium.