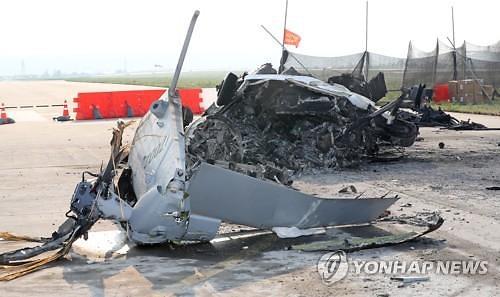 
SEOUL -- A defective part manufactured by Aubert & Duval S.A. based in Paris was blamed for the deadly crash of a new Marine Corps helicopter in July. South Korean inspectors said poor heat treatment caused a crack in the roto mast provided by the French company.

The Marineon helicopter crashed during a test flight on July 17 at a naval air base in the southeastern port city of Pohang after falling from a height of about 10 meters. The crash killed five Marines, triggering a probe by a team of civilian, government and military experts.

On a contract with Airbus Helicopters, Aubert & Duval has provided rotor masts. KAI said Friday it would hold talks with the two French company on compensation. The crash dealt a blow to South Korea's state project to produce home-made transport utility helicopters for military and civilian use.

To replace an aging fleet of utility helicopters, the Surion project was launched in 2006 with Airbus Helicopters selected as a technical partner in South Korea's biggest arms deal ever with a non-American company. Development was completed in 2012.