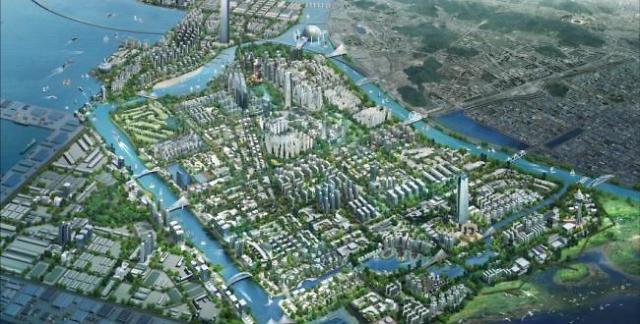 
SEOUL -- A much-heralded project to turn Songdo, an international business district built on reclaimed land connected through a long sea-crossing bridge to South Korea's main gateway, into the "city of water" like Amsterdam will finally start next year, despite an unfinished debate over its economic feasibility.

Songdo, a waterfront area in Incheon west of Seoul, is located in a vast free economic zone where various incentives such as tax reductions, estate support, and subsidies are given. The district now houses about 80 foreign companies, but development has been slow mainly due to a lukewarm response from foreign investors.

Incheon Free Economic Zone Authority (IFEX) has envisaged the so-called Songdo Waterfront Project to connect artificial canals and a lake in a square shape surrounding Songdo as part of its long-term development. The project is aimed at building an ecological marine site and preventing flood damage by preserving water.

Construction was to begin in 2016, but the project has been delayed due to environmental, financial and other concerns. Residents in Incheon's old town have opposed it, citing the depletion of city coffer, while people in Songdo wanted quick steps, supporting an original blueprint that required some 900 billion won ($800 million).

Once the project is completed, an artificial beach will be built with docks for ferry boats, marine recreational facilities, outdoor stages and parks. Sluices will control the flow of seawater in and around the business district. 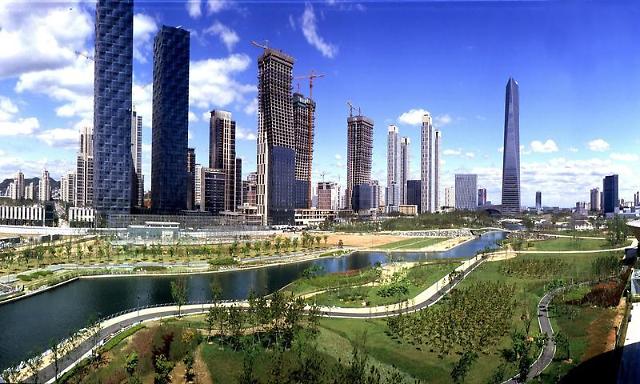 
Skepticism grew after the Korea Research Institute for Local Administration, a policy research institute, found in a feasibility study published in April that the waterfront project is not economical. However, IFEZ Commissioner Kim Jin-yong was adamant to go head even on a reduced scale.

This week, Kim came up with a revised blueprint that required an injection of 621 billion won into a waterway stretching 16 kilometers by 2027, starting with the construction in March next year of a 930-meter canal, four bridges and a water gate,.

"We will start construction in earnest from next March after the quick selection of a builder," Kim said Monday, promising to spend 73.4 billion won on opening a canal in the second half of 2021. Still, he was not clear about how to finance the remaining part of the project.

An association of civic groups in Incheon has urged city authorities to seek the balanced development of the entire port city, insisting Songdo has already sucked a large amount of taxpayers' money.