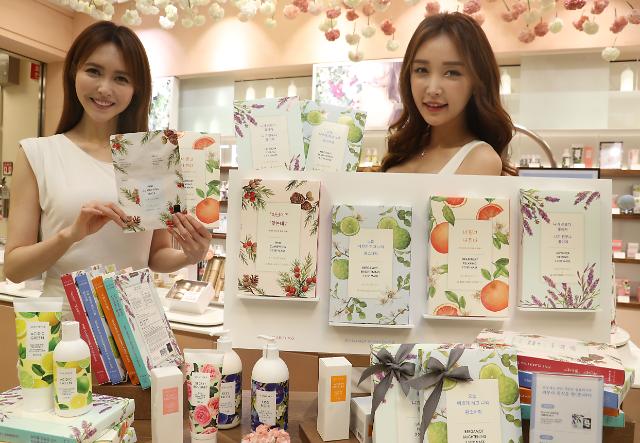 
SEOUL -- It could be a temporary change in preference, but mask packs are no longer popular among foreign travelers in South Korea, which has led Asia's fast-growing sheet face mask market along with China.

A survey of beauty shops, conducted by Lalavla, a drug store brand of South Korea's health and beauty retailer GS Retail, showed that mask packs gave way to color cosmetics last year in the list of items preferred by foreigner visitors. Color cosmetics include nail care and facial makeup products such as lipstick, foundation and mascara.

Lalavla said the most preferred item in 2018 was eye shadow products, followed by powder fact products and lip tint. Mask packs, which were the most wanted in 2017, stood ninth in 2018.

With no concrete explanation, it's still premature to say that the survey indicates the facial sheet mask boom in Asian beauty markets is fading. One reason presented by Lalavla was a rapid increase in the arrival of tourists from Vietnam and other South Asian countries.

According to data from the Korea Tourism Organization, some 15.34 million foreign tourists visited South Korea in 2018, up 15.1 percent from a year ago. Chinese visitors topped the list with 4.78 million, or 31.2 percent of the total.
In 2018, South Korea received 2.94 million Japanese tourists, up 27.6 percent, while Taiwan stood third with 1.1 million, up 20.5 percent. Those from Vietnam and other Southeast countries showed a sharp increase thanks to a Hallyu (Korean culture wave) boom.

According to a market report published by Transparency Market Research, the global sheet face mask market is expected to reach a value of $551.3 million by 2026. The Asia Pacific region saw rapid growth, mainly due to growing demands for beauty products and personal care products.

Sheet face masks have gained popularity among the urban population of almost every country worldwide. In the Asia Pacific, South Korea and China have led consumption.