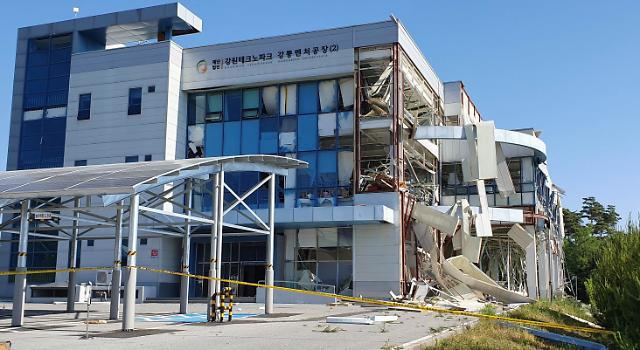 SEOUL -- South Koran police launched an investigation into the explosion of hydrogen storage tanks that killed two people and injured six others when a small fuel-cell power system was on a test operation at a venture complex.

The explosion on Thursday at Gangwon Technopark in Gangneung in the eastern port city of Gangneung came as the South Korean government stepped up efforts to utilize hydrogen as a new power source. Because of its eco-friendly characteristics, fuel cells are considered the next-generation renewable power source.

Firefighters said all three hydrogen storage tanks with a capacity of 400 cubic meters each were destroyed in the explosion. There was no fire, but the explosion was strong enough to send debris being scattered in an area well over 3,000 square meters.

"It's not known whether three tanks exploded at the same time or whether it was a series of explosions," Gangneung's fire station head Lee Jin-ho told reporters. He said those killed were presumed to have been hit by debris while passing by storage tanks set up near the wall of a factory, which produces ceramic parts for equipment to process displays.

The explosion occurred when two researchers from a new renewable company guided six young venture businessmen who were on a field survey, Lee said. Using solar energy, hydrogen was stored at tanks to produce electricity with fuel cells.

rade, Industry and Energy Minister Sung Yun-mo called for a thorough probe to find the exact cause of the explosion. "Most of all, it must be clarified scientifically what caused this accident."

Hydrogen gas is an extremely high-powered fuel. Liquid hydrogen is sometimes used as an extremely condensed hydrogen fuel. Hydrogen is lighter than air and diffuses rapidly, but it is flammable like gasoline and natural gas and can behave dangerously under specific conditions.

On January 8, 2007, a hydrogen explosion at the Muskingum River Power Plant in Ohio killed one and injured 10 other people. The explosion occurred during a routine delivery of hydrogen when a hydrogen relief device failed, which allowed the contents of the hydrogen tank to escape and be ignited by an unknown source. The explosion underscored the importance of implementing safe equipment design and construction as well as proper procedures for handling hydrogen.