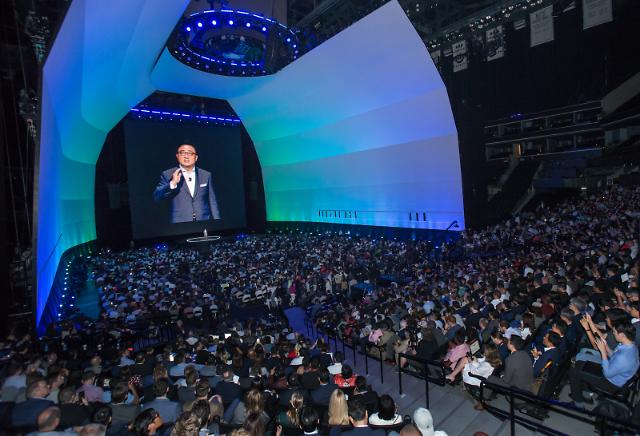 
SEOUL -- Samsung Electronics, the world largest producer of microchips and smartphones, warned of a possible crisis next year due to uncertainties caused by a global economic slowdown and a Sino-U.S. trade war and said there would be no crippling impact from a trade war between Seoul and Tokyo just for a while.

After an event in New York to show the company's iconic phablet phone, Samsung's mobile division head Koh Dong-jin told Korean reporters that there would be no disruption in the release of Galaxy Note 10 and foldable phones in the second half because Samsung has stocked parts and materials that can last for up to four months.

"If we consider fourth vendor companies, it is difficult to predict what will happen in three to four months," he said, adding Samsung would be affected by a prolonged dispute over Japanese restrictions on exports of photoresists, fluorine polyimide and etching gas used for the production of microchips and displays.

Samsung had prepared for the release of Galaxy Fold featuring a 7.3-inch display which folds into a compact device with a separate 4.6-inch cover display in April to take the upper hand in the world's foldable smartphone market. However, negative assessments from early reviewers and problems found with the folding screen and related mechanism forced Samsung to delay the launch of Galaxy Fold.

"There seems to be a lot of things that I didn't know when I tried to innovate," Koh said, adding Samsung may not achieve its original goal of selling one million foldable phones. This year, it will be released in a limited amount in more than 20 countries, including South Korea, he said.

"I think there must be a demand for foldable phones," Koh said. "It's important to make meaningful innovations in the market, and I don't care much about putting them out before Huawei's foldable phones."

Although the global premium smartphone market is showing a trend of reverse growth, 5G serves as a traction vehicle that can increase demands for premium phones, Koh said. "We hope that Galaxy Note 10, which will be released as 5G, will do well globally."