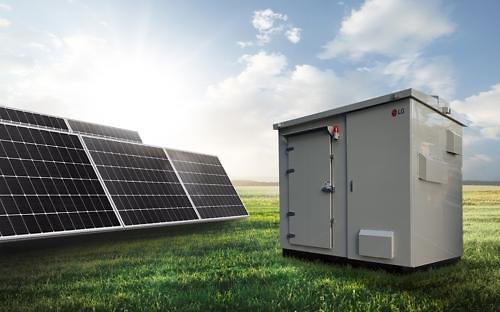 
SEOUL -- LG Electronics released an all-in-one energy storage package for small-sized solar generators which can be controlled wirelessly using mobile networks, in an effort to strengthen its presence in the global energy storage system market which is growing rapidly with an annual average growth rate of about 40 percent.

The South Korean tech giant said in a statement on Tuesday that it released a 100 kilowatt-class all-in-one energy storage system (ESS) package for small-sized solar generators which is easy to operate, thanks to its remote control features. LG emphasized that the new ESS is easy to install.

The ESS package, fitted with 313-kilowatt-hour batteries manufactured by LG Chem, the top battery maker in the global ESS market, can store enough energy to power 30 households for a day. It also meets the South Korean government's strengthened safety regulations on ESS, allowing its operator to remotely power off the system and extinguish a fire in case of an emergency.

ESS is designed to store electricity generated by various power generators including thermoelectric and hydroelectric power plants. The global market for ESS is estimated to reach $13.13 billion by 2023, according to global market research firm GlobalData, and the Asia-Pacific is the largest market with countries aggressively increasing investments for improving their power grid infrastructure.