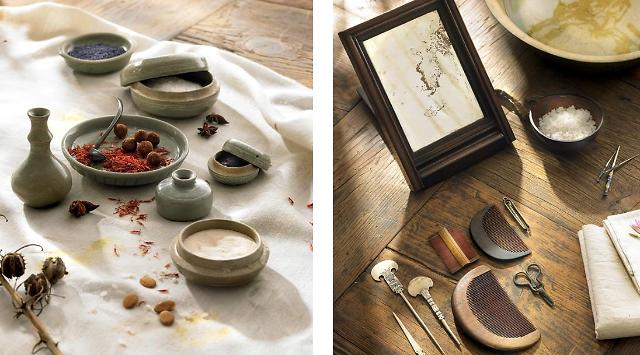 [Courtesy of the Coreana Cosmetics Museum]

SEOUL -- For makeup, royal family women during the Joseon dynasty that ruled the Korean peninsula from 1392 to 1897 were found to have used cosmetics that contained harmful substances such as carbonated lead and mercury.

In an excavation that began at the Joseon Dynasty tomb of King Yeongjo's daughter in Namyangju, a city east of Seoul, archaeologists discovered burial accessories including a collection of small porcelain cosmetic containers used by Princess Hwahyeop (1733∼1752) who died of measles at the age of 19.

Researchers at the National Palace Museum of Korea have conducted a microscope examination that showed harmful ingredients contained in leftover face powder. "It seems to have mixed organic matter with wax and oil to form a cream," Kim Ho-yoon, a researcher, said, adding that carbonated lead was mixed with ores in a 1:1 ratio while the red powder had mercury and sulfur which make up cinnabarine.

Traditionally, cosmetics were made from plants and grains with fragrance added to them. Ground rice and millet were used as powders. Rouge extracted from safflower was applied to cheeks and lips. In an earlier examination of cosmetics cases excavated from the tomb of Queen Yun (1766-79), who married King Jeongjo, researchers found that bee's wax was mixed with other substances.

According to Gyuhap Chongseo, an ancient women's encyclopedia, eyebrows were the central feature of a woman's face. Plant ash was the basic raw material used for eyebrow ink, with which women drew their eyebrows in various shapes. The primary colors were black, blue, and dark brown.