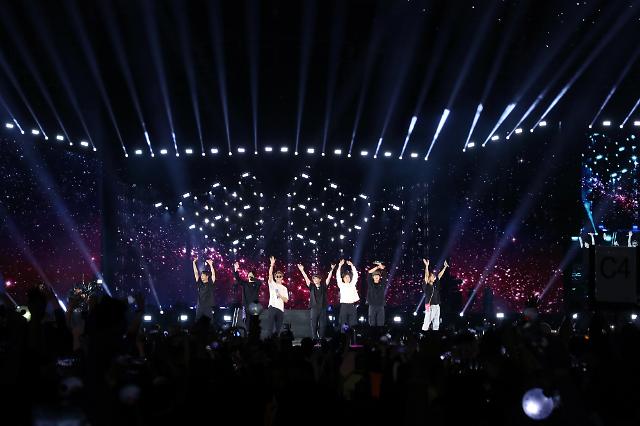 SEOUL -- K-pop band BTS will meet global fans by broadcasting its Seoul concert, the final leg of this year's world tour, live through a smartphone video-sharing app and selected cinemas in seven countries.

Big Hit Entertainment said in a statement on Wednesday that the first-day concert in Seoul will be aired through V Live, a smartphone video content platform, as pay-per-view content. The second-day event on October 27 will be premiered live at selected theaters in South Korea, Japan, Singapore, Thailand, Taiwan, and Hong Kong.

Because of the time difference, the recorded version of the Seoul concert will be played at theaters in the United States.

Fans responded with explosive reactions. "The local theater in my small city is live streaming the last concert from South Korea on October 27th and I’M GOING WITH MY GRANDDAUGHTER!!!!!!" said Twitter user "Donna OConnell". Another user "Mina" said: "can’t wait to watch it through my computer screen :’)"