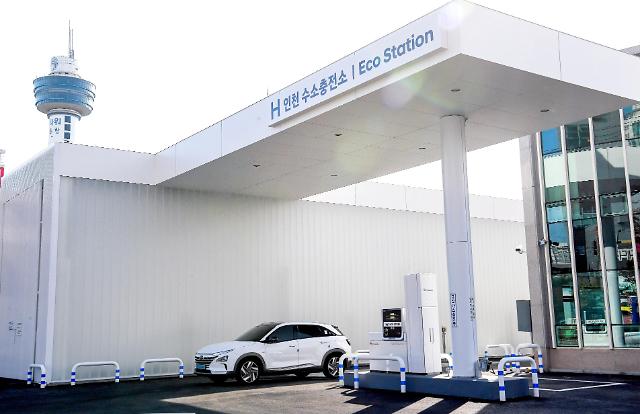 SEOUL -- In an effort to popularize eco-friendly vehicles such as electric cars and hydrogen fuel cell vehicles, the Hyundai auto group has forged a partnership with South Korea's expressway operator to establish a network of fast-charging stations that would provide convenience to drivers.

Hyundai said on Friday that it signed a cooperation agreement with Korea Expressway Corp. to set up 350 kilowatt-hour-class fast chargers in 11 expressway service stops by the end of 2020.

"We will make our utmost efforts to meet the government's eco-friendly policy and to ensure that charging facilities are built and operated without any disruptions through the distribution of the nation's first hydrogen and electricity complex and ultra-fast electricity charging infrastructure," Korea Expressway Corp. project planning head Moon Ki-bong was quoted as saying.

Currently, every expressway service stop has at least one charger that normally takes some 40 minutes to charge up to 80 percent of battery capacity. Because of the slow charging speed, sometimes EV drivers have to wait for hours in the queue. According to Hyundai, it will take just 20 minutes with fast chargers.

Hyundai will build its first integrated facility for the simultaneous fast charging of fuel cell and pure elecrtric vehicles on an expressway stop in Eumseong some 91 kilometers (56 miles) southeast of Seoul next year. Currently, there are eight hydrogen fuel cell charging facilities on expressways in South Korea.

Hyundai's move to accelerate the establishment of charging infrastructure is in line with a government drive to adopt hydrogen fuel cells and electric batteries as a mainstream fuel in the future. A roadmap was disclosed earlier this year to produce 6.2 million fuel cell vehicles for domestic consumption and exports by 2040.

While other carmakers focus on electric vehicles using lithium-ion cells, Hyundai has touted hydrogen fuel as an alternative to solve global problems such as pollution and restore resource depletion because of its eco-friendly characteristics.