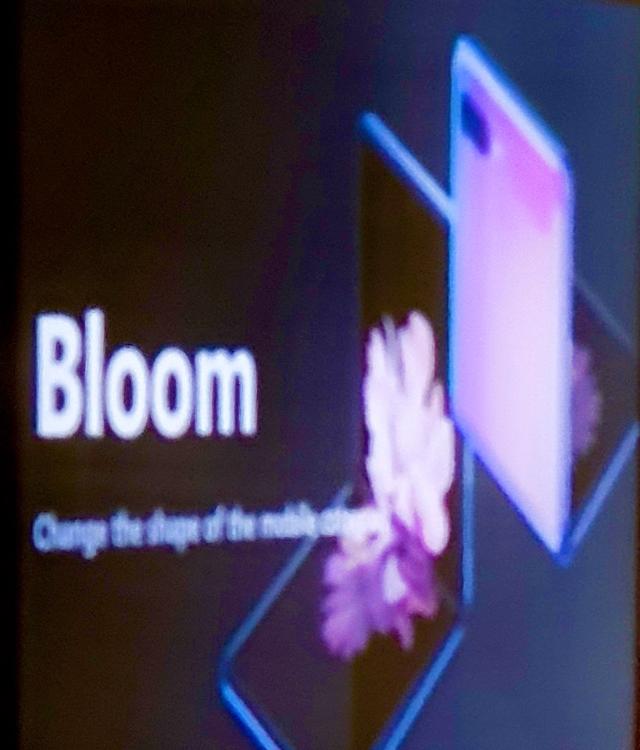 LAS VEGAS -- Samsung Electronics's new foldable smartphone will be called "Galaxy Bloom." The design was inspired by the powder compact of Lancome, a French luxury cosmetics brand. Bloom, which targets female customers in their 20s, is the first smartphone to support  8K filming.

On the opening day of CES 2020, Samsung's IM division head Koh Dong-jin met with executives of global mobile telecommunication companies one after another. He introduced four new products that will be unveiled next month. The new products were displayed at Samsung's private booth.

The next-generation smartphone succeeds "Galaxy Fold," which was released in September last year. It became known for the first time as Samsung unveiled its concept through the Samsung Developer Conference. Unlike Galaxy Fold, Galaxy Bloom can be folded up and down around the horizontal axis. Instead of plastic film, the display panel was covered with an ultra-thin glass called UtG. Only 5G Galaxy Fold models have been released in South Korea, but Samsung will release the 4G LTE model of Galaxy Bloom.

Koh met customers and explained that the design motif for Galaxy Bloom was Lancome with its size similar to the Lancome compact powder. When unfolded, it is 7.3 inches and almost half smaller than Galaxy Fold, which is equivalent to a tablet PC.

Through Galaxy Bloom, Samsung plans to actively target female consumers in their 20s who have less used Galaxy smartphones. Bloom is reminiscent of a flower-like spread up and down.

Samsung will change the names of its "S" series flagship lineup. The name of a follow-up to Galaxy S10 will be called Galaxy S20. Since the Galaxy S series was launched in 2010, Samsung has increased the number by one every year. The company introduced the number 20, judging that a new strategy is needed to mark the 2020s.

The Galaxy S20 series will be divided into general, plus and ultra models. Ultra models are equipped with 100x optical zoom and 100 million pixel image sensors to maximizes camera performance. The camera on Galaxy S20's ultra model is called "Hubble," named after the space telescope.

Samsung will open an era of "8K in my hands." All new products can film with 8K resolution for the first time as a smartphone. YouTube will start streaming 8K video. Samsung and Google have already concluded talks. If 8K images can be filmed with smartphones, the lack of content, a chronic problem for 8K TVs, can be resolved and Samsung expects the 8K TV market to expand.

Samsung will hold its Unpack event in San Francisco next month.