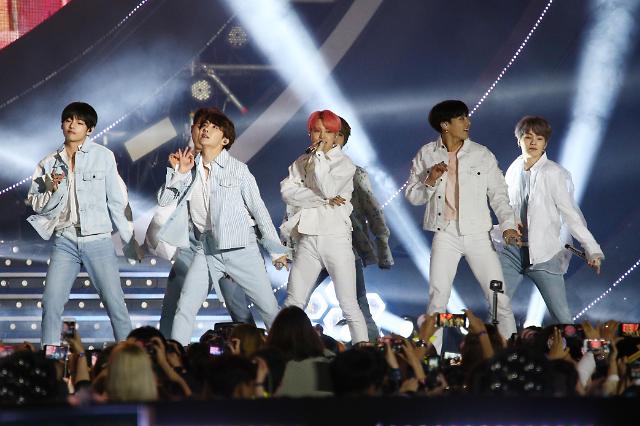 SEOUL --  K-pop sensation BTS has served as the main driving force in the global promotion of Hallyu (Korean cultural wave) in 2019, especially in Europe, according to a state-funded body under the Ministry of Foreign Affairs.

The Korea Foundation said in a report published on Tuesday that 99.3 million people are active as members of Hallyu-related clubs around the world in 2019, up 11 percent from a year ago. Along with BTS, K-dramas such as "Kingdom" released through Netflix, the world's largest over the top (OTT) video-on-demand service operator, contributed to increasing the presence of Hallyu content.

Since its debut in 2013, BTS has consistently expanded its fan base abroad by actively communicating through social media. Fans have formed a special bond with BTS, based on sympathy.

The popularity of BTS and other K-pop bands among young Russians was high. Even though K-pop is rarely introduced at Russian TV stations, fans are using the Internet to voluntarily create clubs and share information. Clubs played a major role in the spread of Hallyu as they provide Russian subtitles for dramas, entertainment and movies as well as K-pop.

In the early 1990s and 2000s, first-generation Hallyu fans were mostly women in their 20s, 30s and 40s who were enthusiastic about K-drama. Since then, the average age range of Hallyu fans has been lowered and K-pop cover dance has also promoted Hallyu in Russia.

A key Hallyu content is K-pop, which has spread to every corner of the global village through social networking sites and YouTube, but Hallyu consumption is now more diverse, spreading to beauty, fashion, webtoon and tourism.

Twitter Inc. said that 6.1 billion tweets about K-pop were created worldwide in 2019, up 15 percent from a year ago. Thailand tweeted the most in 2019, followed by South Korea, Indonesia, the United States, the Philippines, Brazil and Malaysia.

BTS (@bts_twt) was the most retweeted account in 2019, followed by EXO (@weareoneEXO) and GOT7 (@GOT7Official).

Korea Foundation speculated that the size of Hallyu has increased thanks to diversified consumer platforms such as social media, YouTube and Netflix. The K-film sector was also spotlighted last year after the black comedy film, "Parasite" directed by Bong Joon-ho, was awarded the Golden Palm award at Cannes.

However, the foundation warned that because Hallyu is a precious asset in public diplomacy, it is necessary for related industries to establish a systematic crisis management strategy by effectively responding to issues that pose a threat to the growth of the Hallyu.

In 2019, the South Korean entertainment was battered by a sex and drug scandal involving Seungri, a disgraced BIGBANG member who was forced to quit his band.