Extensive crackdown on mask hoarding or shipment by Chinese peddlers 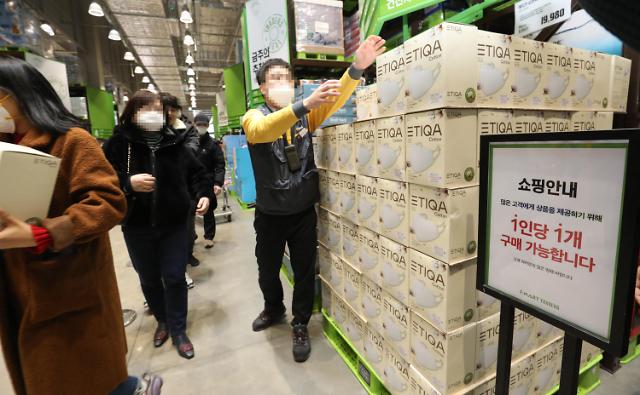 SEOUL -- In an apparent move to stop shipments by Chinese peddlers, South Korea launched an extensive crackdown on cornering the market for face masks and other hygiene products such as hand sanitizers with stiffened penalties and fines.

From February 5, anyone involved in practices of cornering and hoarding can receive a maximum jail term of two years or a fine of up to 50 million won ($42,194). A 180-member team of tax and government officials, as well as police, will conduct a crackdown with customs authorities strengthening checks at airports and ports.

"The government will take strong measures against cornering and hoarding activities and illegal smuggling," Deputy Heal and Welfare Minister Kim Kang-rip said on Wednesday, warning of "extensive crackdowns and effective punishment." He said that customs clearance and inspection would be bolstered to prevent the "mass transfer of masks by peddlers."

Following the outbreak of a new deadly coronavirus that spread across borders, wearing surgical face masks is an essential part of hygiene practices in South Korea, China and Japan. Prices have soared due to a sharp rise in demand for face masks, hand sanitizers and other disinfectant products.

In South Korea, masks have been recommended as a precautionary measure to avoid contracting the deadly virus that has killed hundreds of people in China. Health officials suggest masks can be effective to an extent, although experts say they are less effective if not changed regularly, or when not used with other hygiene precautions.

"We will block the mass shipment of masks and hand sanitizers in advance," Finance Minister Hong Nam-ki said after a curtailed cabinet meeting on Wednesday, referring to a flurry of orders from Chinese importers and peddlers who are desperate to purchase South Korean products even at a higher price.

Prime Minister Chung Sye-kyun said South Korea would consider expanding a travel ban on those traveling from China if needed. "The government will take necessary measures by thoroughly checking not only in China's Hubei Province but also in its surrounding areas," he said at a meeting of government and ruling party policymakers.

From Tuesday, South Korea barred foreigners who visited or traveled through China's Hubei province in the past two weeks.