Samsung claims to be 'industry-first' to commercialize ultra-thin glass 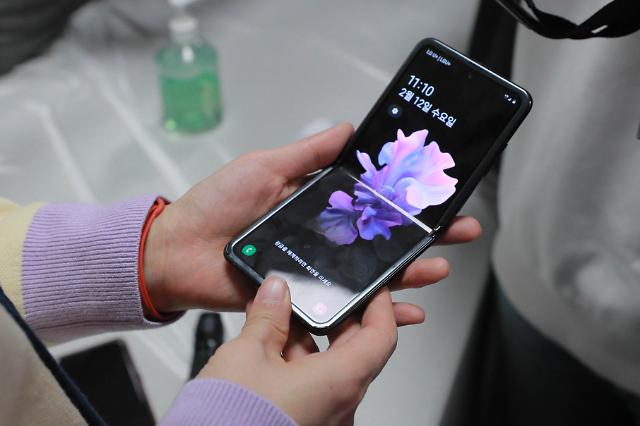 
SEOUL -- Samsung Display claimed to be "industry-first" to commercialize ultra-thin tempered glass as a window material for foldable displays. The first user is Samsung Electronics' second foldable phone, Galaxy Z Flip, which was released on February 14 in the United States and South Korea.

Samsung Display said in a statement on Wednesday that its ultra-thin glass (UTG) featuring firmness and flexibility at the same time would satisfy customers' diverse needs for foldable displays and expanded choices.

Special materials were injected into UTG to ensure uniform rigidity, the company said, adding its UTG has the rigid properties of glass, smooth touch, and uniformity of the surface while enhancing flexibility.

Samsung SDS said its UTG was certified in a durability test by Bureau Veritas, an international certification agency based in France. As the largest shareholder, Samsung has collaborated with Dowoo Insys, a venture company established in 2010, to upgrade UTG technology.

UTG offers many advantages over plastic or silicon. Hardened UTG is scratch-resistant and bendable and shows no signs of fatigue, making it an ideal substrate or encapsulant for OLEDs that ultimately make bendable or foldable displays possible.

Because of its versatility and flexibility, CPI films are now widely used as an alternative to glass displays, which is more fragile and less flexible. However, CPI films are prone to scratches and creases that are created when folded and unfolded repeatedly over a long time. Also, some users find it not clear or transparent enough compared to glass displays.