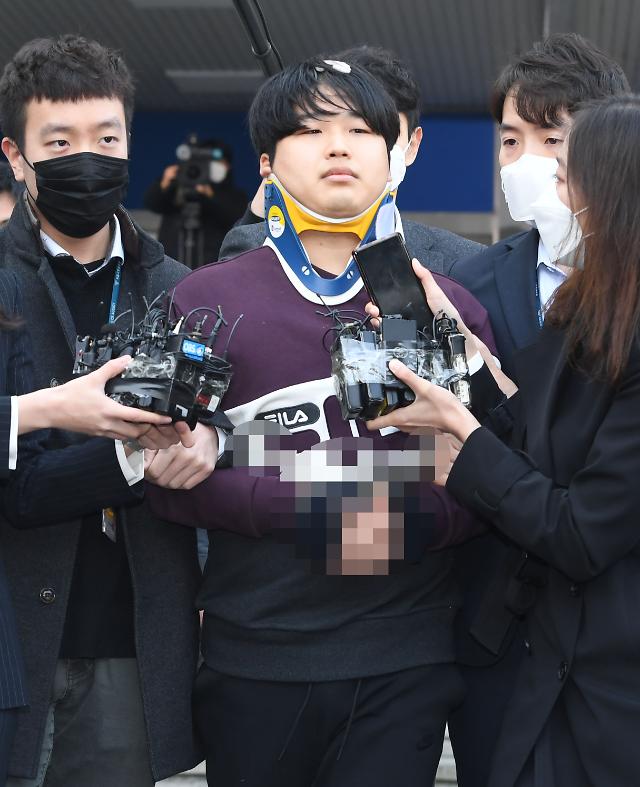 Cho Ju-bin, a sex chat room operator, appears before journalists at a police station in Seoul on March 25.[Photo by Yoo Dae-kil = dbeorlf123@ajunews.com]

SEOUL -- Wearing a neck protector and a medical bandage plastered on his head, a 24-year-old man expressed his gratitude for being able to stop the demonic nature of his two-faced life doing volunteer work at social welfare facilities and running a pay group chat room that showed photos and videos of violent sex acts involving underage victims.

"Thank you for stopping the unstoppable devil's life," Cho Ju-bin said Wednesday as he was dragged out of a Seoul police station for an uproarious photo session and transferred to state prosecutors on charges of violating the act on the protection of children and youth against sex offenses.

Cho is accused of luring and blackmailing at least 74 people including 16 underage girls into performing gruesome sex acts and selling related videos in mobile chat rooms from December 2018. "I sincerely apologize to all those who have been hurt by me," he said.

Cho had been involved in voluntary work multiple times at orphanages and other social welfare centers from October 2017 until hew as arrested on March 19.

The case sparked public fury with millions of angry people signed petitions public petitions, which were posted on the presidential website and called for punishment and the disclose of all users. President Moon Jae-in ordered a thorough investigation for the punishment of operators and users together, condemning it as a "cruel" crime destroying human life.

Users have paid in cryptocurrency to watch videos posted by Cho's chat room on the messaging service Telegram. Equal rights groups have voiced resentment, insisting some 260,000 men have visited similar chat rooms, including about 10,000 affiliated with Cho's rooms.

Cho had demanded a subscription fee of at least 1.5 million won ($1,184) from those who wished to join one of his three secretive chat rooms. Subscribers were required to provide selfies and photographed ID cards.