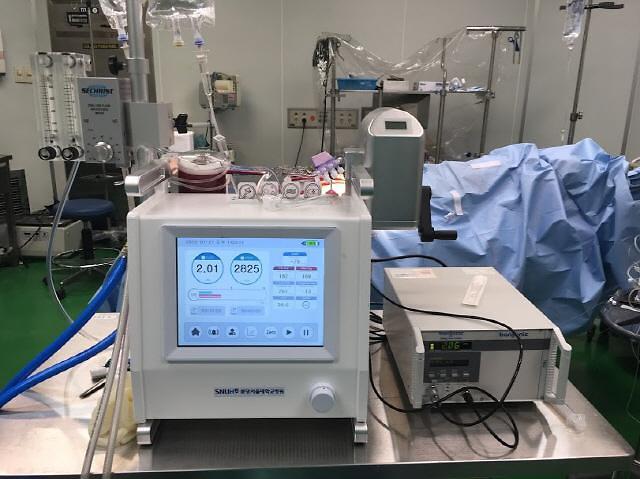 
SEOUL -- South Korean researchers have developed a crucial and expensive piece of life-saving medical equipment called "ECMO" that provides prolonged cardiac and respiratory support to critical patients. The first home-made equipment was successfully applied to the operation of lung transplantation.

Critical patients infected with a novel coronavirus have received treatment with artificial respiration and extracorporeal membrane oxygenation (ECMO), which is an extracorporeal technique of providing prolonged cardiac and respiratory support. Some 350 ECMOs, all from foreign companies, have been used by South Korean hospitals.

A joint research team involving Seoul National University (SNU) College of Medicine, SNU Bundang Hospital, Sogang University and Asan Medical Center has used domestic technology and equipment to develop the prototype of ECMO in October 2019. It has been used for a patient who needed a lung transplant surgery due to acute respiratory failure.

ECMO consists of devices such as a blood pump, an oxidizer and a blood circuit. The research team has used home-made components other than an oxidizer and a cannula. A cannula is a tube that can be inserted into the body, often for the delivery or removal of fluid or for the gathering of samples. The localization rate is around 70 percent and the research team aims to raise it to 95 percent.

ECMO and artificial ventilators have played a crucial role in lowering the death toll in a fight against COVID-19.

The research team led by Jheon Sang-hoon, a professor of cardiothoracic surgery at SNU Bundang Hospital, secured original technology ranging from basic design to production of the centrifugal blood pump, established know-how in making a blood oxidizer and acquired technologies on the production of electronic control devices for the operation, control and monitoring of a cardiopulmonary circulation support system.

"We have gained confidence that South Korea can develop complex, high-value-added medical devices through the localization of ECMO, a piece of essential equipment for intensive care," Jheon said.

Kim Hee-chan, an SNU College of Medicine professor, said the research team would develop improved products for mass production through local companies. "We will increase the number of domestic applications and also enter overseas markets to open an era of localization for medical devices in earnest."