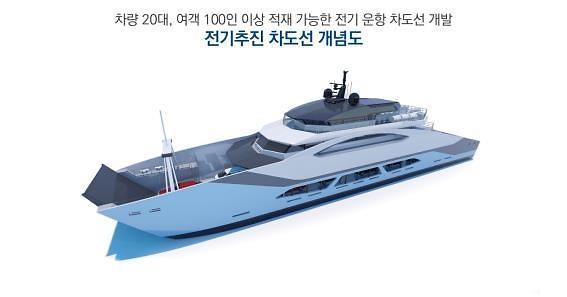 [A rendered image provided by the Ministry of Oceans and Fisheries]

SEOUL -- South Korea will embark on the development of electric coastal car ferry ships that can carry passengers, cars and cargo along the country's shorelines to reduce carbon emissions. The project involving domestic and foreign research bodies, such as the University of South-Eastern Norway, aims to produce electric ships targeting the global market.

The Ministry of Oceans and Fisheries revealed a 26.8 billion won ($21.9 million) project on Monday to develop an electric car ferry ship by 2023 for commercial operation a year later. The ship will have a capacity of more than 100 passengers, 20 vehicles and cargo. Currently, there are about 165 diesel-fueled costal car ferries in operation.

"We hope that by succeeding this project, we will preempt the global electric ship market and lead innovative growth in the marine sector," an oceans ministry official was quoted as saying.

Along with the electric cargo ship, the ministry will develop a mobile power provision system capable of providing power to electric ships as well as small islands scattered across the country's western and southern coastal areas

The electric cargo ship will become South Korea's bridgehead to the global electric ship industry that is projected to reach 15.6 billion in 2030, according to global market research firm Markets and Markets.