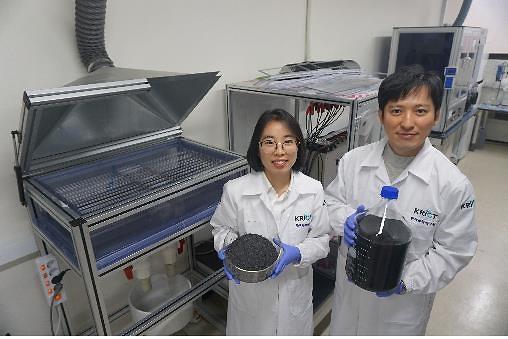 SEOUL -- A state-run research body in South Korea opened the way for the mass-production of high-quality industrial graphene, an atomic-scale honeycomb lattice of carbon atoms, in powder form without treating graphite as a strong acid. A domestic company will seek commercial production within this year.

Graphene is a crystalline allotrope of carbon with two-dimensional properties. The single, thin layer of graphite is a transparent and flexible conductor that holds great promise for various material and device applications, including solar cells, light-emitting diodes, touch panels and smart windows or phones.

The Korea Research Institute of Chemical Technology (KRICT) said its research team has developed an electrochemical stripping process that can send electricity to graphite electrodes to peel graphene into very thin layers. The peeled graphene is extracted in powder form through a filter. The process can produce 60 grams of high-quality graphene per hour.

It is superior in all aspects, including price and quality, to graphene produced by chemical synthesis process, a way to obtain graphene by treating graphite as a strong acid, the institute said.

The institute has transferred its technology to a company that will use graphite produced in a domestic mine to reduce South Korea's dependence on Chinese imports. Graphene produced in South Korea will be used as heat-resistant parts for electronics such as displays and smartphones, and secondary battery electrodes.