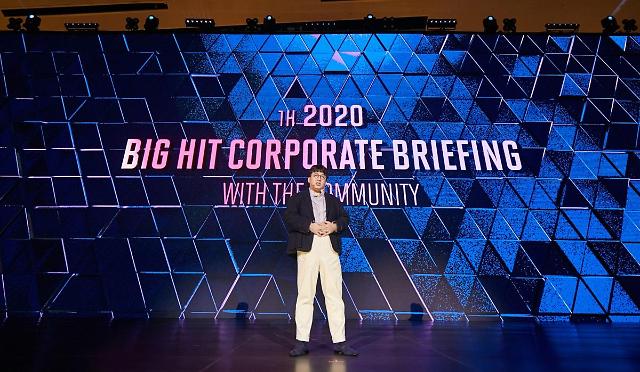 SEOUL --Bang Si-hyuk, the founder of BTS, promised to put his priority on a voluntary and responsible attitude when 23 candidates compete in I-LAND, a survival K-pop idol music show to pick next-generation K-pop artists.

"I will serve to help participants choose and grow on their own, not to be immersed in competition and carry out a set mission," Bang said in an online production press conference on I-LAND. As the general producer of I-Land, Bang will work with Woo Ji-ho, better known by his stage name Zico, and Jung Ji-hoon, better known by his stage name Rain. Actor Namkoong Min will serve as a storyteller.

The program combines the K-pop-focused production expertise of Mnet with the music producing experience of Big Hit to feature competition and partnership among K-pop star wannabes. The first episode will be broadcast through Mnet, a cable TV music channel operated by CJ ENM, on June 26.

The priorities of factors listed by Bang included a personal charm appeal, teamwork and a voluntary and responsible attitude and possibility. "I'm going to focus on potential and possibility rather than what the applicant is like now," Bang said, calling for a different format to meet high public expectations.

CJ ENM said various collaborations and competitions would be held in a complex with futuristic designs reminiscent of "The Hunger Games," a 2012 American dystopian science fiction adventure film, in the northern city of Paju.

"I will do my best as a producer who manages the mental health of the participants rather than know-how or skills," Rain said. Zico, who debuted as the leader of the boy band Block B in 2011 and went solo in 2018, promised to draw out the potential that the trainee himself did not discover while providing tips based on his field experience.

With his 2004 album, "It's Raining," Rain established himself as an international star. In 2008, he made his Hollywood debut in the film Speed Racer and starred in Ninja Assassin (2009).