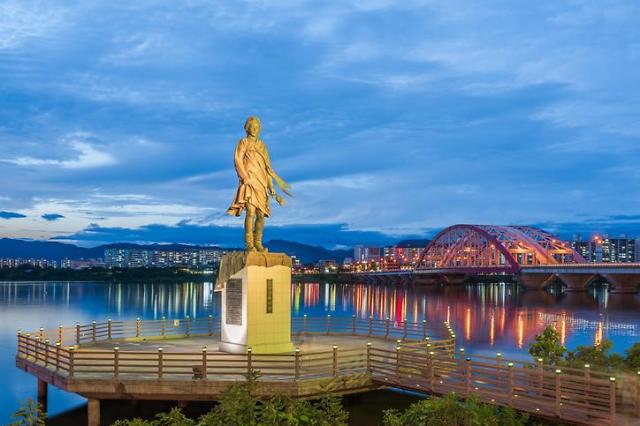 SEOUL -- As part of a national roadmap to reduce the use of fossil fuel, South Korea will actively support the introduction of hydrothermal energy. A riverside convergence cluster will be built in the northeastern city of Chuncheon by 2027 to validate the effectiveness of hydrothermal energy that can reduce CO2 emissions.

The temperature difference between surface water in different seasons can be used to heat or cool buildings. The heat extracted from canals or rivers can be stored in an aquifer thermal energy storage system as renewable energy. Surface water heat extraction has a positive effect on water quality and counteracts urban heat stress, botulism and the proliferation of toxic blue-green algae.

In a report to the Cabinet, the Ministry of Environment unveiled plans to expand the use of hydrothermal energy and spend some 302.7 billion ($252.7 million) won by 2027 to build a hydrothermal energy convergence cluster capable of supplying 16,500 refrigeration tons in Chuncheon, about 70 kilometers (43.5 miles) northeast of Seoul.

The cluster will include a data center, a smart farm and a smart village. A refrigeration ton is a unit of power used to describe the heat-extraction capacity of refrigeration and air conditioning equipment. It is defined as the rate of heat transfer that results in the freezing or melting of one short ton (907 kilograms of pure ice at zero centigrade in 24 hours. A refrigeration ton is equivalent to 3.5 kilowatts.

The project in Chuncheon will serve as an opportunity to spread hydrothermal energy to the private sector, Environment Minister Cho Myung-rae said in a statement, adding the government would support the localization of key technologies such as heat exchangers and compressors. "Through this, the hydrothermal energy industry will not only create quality jobs but also grow into a new pillar of the green industry."

Hydrothermal energy has been in selective use on a small scale in South Korea. From November 2014, the 123-story Lotte World Tower in Seoul used 50,000 cubic meters of water a day from a nearby waterworks pipe to handle 3,000 refrigeration tons or 10 percent of its maximum load.

Samsung Medical Center in Seoul signed a partnership with K-water on June 3 to employ hydrothermal energy using an existing water pipe with a capacity of 11,390 refrigeration tons. Two days later, K-water agreed with local governments to introduce hydrothermal to an urban high-tech industry complex that would be built in Gwangmyeong and Siheung by the end of 2024 by using an underground water pipe.