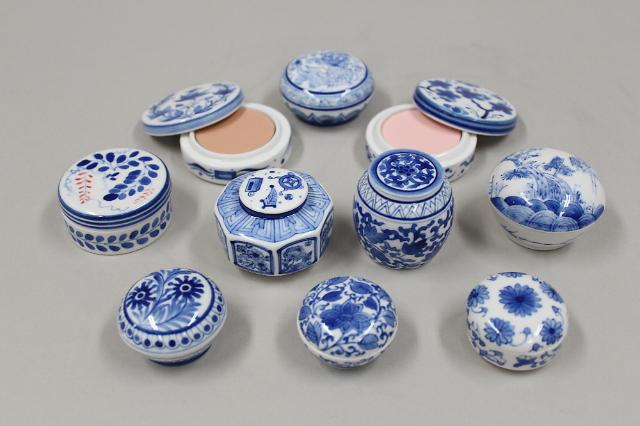 
SEOUL -- Makeup products used by royal family women during the Joseon dynasty that ruled the Korean peninsula from 1392 to 1897 have been recreated in a modern way. Researchers unveiled three types of cosmetic products -- foundation, moisturizing hand cream and lip balm -- that contained traditional ingredients such as wax and safflower petals.

The rebirth of traditional cosmetics used by Princess Hwahyeop (1733∼1752), or Hwahyup, who died of measles at the age of 19 was the result of joint work by the National Palace Museum of Korea, the Korea National University of Cultural Heritage (NUCH) and Cosmax, a cosmetics manufacturer.

In an excavation at the Joseon Dynasty tomb of King Yeongjo's daughter in Namyangju, a city east of Seoul, archaeologists have discovered burial accessories including makeup tools and small porcelain cosmetic containers. A microscope examination showed harmful substances such as carbonated lead, mercury, sulfur and talcum, which were contained in leftover cosmetics.

The reproduced cosmetics would be sold first through an online outlet of the Korea Cultural Heritage Foundation, a special institution that protects and preserves cultural properties, under the brand name of Princess Hwahyup. "We will also sell it at museum souvenir shops and duty-free shops if the COVID-19 situation stabilizes," Cosmax Lab manager Lee Jun-bae said, adding that various low to high-end products would be developed.

"After reproducing excavated cosmetics as they are, there were problems such as heavy metals, low coloration, and fast decay, so we could not industrialize them," NUCH professor Chung Yong-jae said in a ceremony on September 22. Recreated cosmetics were based on traditional ingredients, but they excluded harmful substances and used modern pigments and materials.

Traditionally, cosmetics were made from plants and grains with fragrance added to them. Ground rice and millet were used as powders. Rouge extracted from safflower was applied to cheeks and lips. In an earlier examination of cosmetics cases excavated from the tomb of Queen Yun (1766-79), who married King Jeongjo, researchers found that bee's wax was mixed with other substances.

According to Gyuhap Chongseo, an ancient women's encyclopedia, eyebrows were the central feature of a woman's face. Plant ash was the basic raw material used for eyebrow ink, with which women drew their eyebrows in various shapes. The primary colors were black, blue, and dark brown.