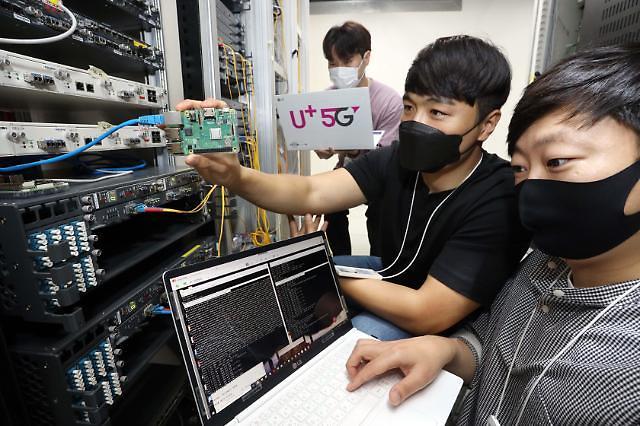 
SEOUL -- Quantum-resistant cryptography technology is essential in the era of quantum computing to ensure safe data transmission at hospitals and other places handling sensitive information. It has been applied to corporate lines in a pilot project arranged by LG Uplus, a mobile carrier in South Korea, to verify commercial usefulness.

LG Uplus (LGU+) has partnered with Cheon Jung-hee, a Seoul National University professor of mathematical sciences who heads Cryptolab, a lab involved in encryption and data security, to commercialize post-quantum cryptography (PQC) technology, which refers to cryptographic algorithms that are thought to be secure against an attack by a quantum computer.

LGU+ said that PQC technology has been applied to 640 kilometers of an exclusive line connecting LG Innotek's plant in Pyeongrtaek and its data center in the southern port city of Busan as well as an exclusive line used by Eulji Medical Center at its buildings in Seoul and Daejeon. LG Innotek is the electric component unit of South Korea's LG Group.

Quantum cryptography is an essential security solution for safeguarding critical information. Data encoded in a quantum state is virtually unhackable without quantum keys which are basically random number tables used to decipher encrypted information. Post-quantum cryptography does not require separate network infrastructure to distribute cryptographic keys because it can be applied flexibly to different sections of wired and wireless networks that require encryption.

LGU+ said PQC technology is useful in hospitals and other areas that handle sensitive information. "PQC is an innovative technology that can provide security services to various terminal areas such as wireless networks, smartphones and Internet of Things as well as wired networks," Koo Sung-chul, in charge of LGU+'s wired network business, said, adding his company would develop application services specialized for each industry.