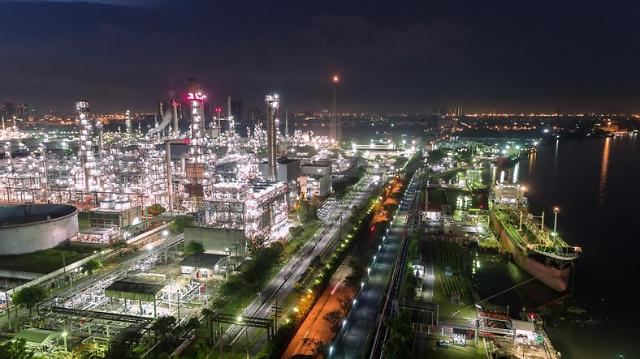 SEOUL -- South Korea's third-largest conglomerate SK Group joined a government campaign to accelerate the introduction of a hydrogen ecosystem by producing hydrogen for use at home and abroad. The group aims to make inroads into Asian markets by securing a competitive edge in hydrogen-related technologies.

SK Holdings said it has set up a task force involving group units such as SK E&S, an energy company involved in gas field development and power generation, to build a plant capable of producing 30,000 tons of liquefied hydrogen per year from 2023. The liquefaction of hydrogen is essential in a government campaign to expand the use of fuel cells.

The advantage of liquefied hydrogen is its high density compared to compressed gas, which means that more energy can be contained in a given volume for easy transportation. A hydrogen fueling station stores liquid hydrogen before being converted to pressurized gas.

SK E&S, which imports more than three million tons of liquefied natural gas per year, will also produce 250,000 tons of blue hydrogen from 2025. Blue hydrogen is derived from natural gas with carbon capture technology while green hydrogen is produced from water using renewable power. As a long-term strategy to establish a hydrogen value chain, the group will produce green hydrogen using renewable energy such as solar and wind power.

Because of growing concerns about a dwindling supply of oil and emissions of pollutants, some countries have tried to adopt hydrogen fuel for their public transport system. South Korea has unveiled a roadmap to produce 6.2 million fuel cell vehicles by 2040. In April, Hyosung Group partnered with Linde, a Dublin-based engineering group, to build a plant capable of producing 13,000 tons of liquefied hydrogen per year.

The SK group would establish a hydrogen value chain covering production, transportation and charging. Gas stations run by its refinery arm SK Energy would be used as a green energy service hub.