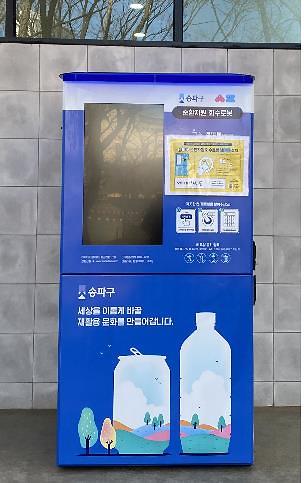 
SEOUL -- A southern Seoul district has adopted an artificial intelligence-based recycling robot that is capable of sorting cans and plastic bottles from the garbage. The robot was designed to increase the district's recycling rate.

In South Korea, recyclable materials are normally sorted by categories such as plastic, metal and paper before being thrown out of homes and offices. However, they get easily mixed up when cleaners pick up recyclable garbage. Workers normally sort them out by hand at recycling centers.

Songpa District in southern Seoul said in a statement on January 14 that two AI-based recycling robots were disposed at popular parks. The robots use a camera to recognize the shape and material of garbage. They will separate cans and plastic bottles from other garbage. Sorted recyclables are compressed into blocks for storage.

"We will be able to increase the recycling rate of Songpa District through the adoption of AI-based machines," Songpa District head Park Sung-soo was quoted as saying. For every can and bottle recycled, a citizen will be given special points that can be converted to cash.