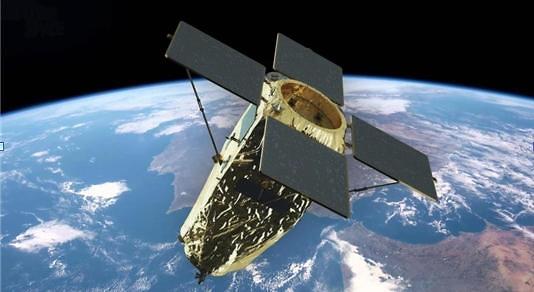 
SEOUL -- South Korea will launch a new medium-sized satellite for precise ground observation in March at a space center in Kazakhstan aboard a Russian rocket. The 500-kilogram satellite has been developed in a five-year state program to establish a universal standard platform aimed at securing independent satellite development technologies.

The satellite left the state-run Korea Aerospace Research Institute (KARI) in the central city of Daejeon on January 22 for delivery to the Baikonur launch site in Kazakhstan. It will be placed into low Earth orbit on March 20 aboard the Soyuz 2.1a rocket of Russia's JSC Glavkosmos. After a two-month test operation at an altitude of 498 kilometers (309 miles), it would send observation videos from June.

The satellite with an operating life of four years is 1.86 meters in diameter and 2.89 meters in height. It is the first of South Korea's five medium-sized satellites that would be launched in two stages. The first stage calls for the development of two basic models and three more with different payloads and purposes will be put into orbit in the second stage.

The first satellite was installed with a home-made precision optical camera which features a resolution of 2.0 meters in color and 0.5m in black and whiter. A flash memory-based video data processing device was applied to increase the camera's storage capacity and reduce power usage and weight. "The next-generation medium-sized satellite will provide accurate ground observation videos for efficient land, resource management, disaster response in a timely manner," Lee Chang-yoon, a science ministry policymaker, said in a statement.

Along with medium-sized satellites, South Korea has disclosed the goal of producing 11 small satellites weighing under 100 kg in a space program led by KARI which has developed KOMPSAT (Arirang) multipurpose reconnaissance satellites. The 800kg KOMPSAT-2 operates at an altitude of 685 km. Hanwha Systems is involved in the development of an infrared imaging system of Arirang 7A with ultra-high-resolution optical capabilities that will be launched in 2021.

From 2011, South Korea has developed home-made geostationary satellites, Cheollian 2A and 2B, as well as a three-stage indigenous rocket launch vehicle called the Korea Space Launch Vehicle-2 (KSLV-2), also known as Nuri, which will lift off in 2021. Cheollian 2B is the twin satellite of Cheollian 2A launched in December 2018. In February 2020, Cheollian 2B was put into orbit to monitor and collect atmospheric and marine environmental information around the Korean Peninsula.

A new system utilizing South Korea's Mugunghwa-6 satellite for communication was put into operation in July 2020, allowing troops to stay connected and use the Army Tactical Command Information System (ATCIS), a battle management system, even when a wired network is not available.