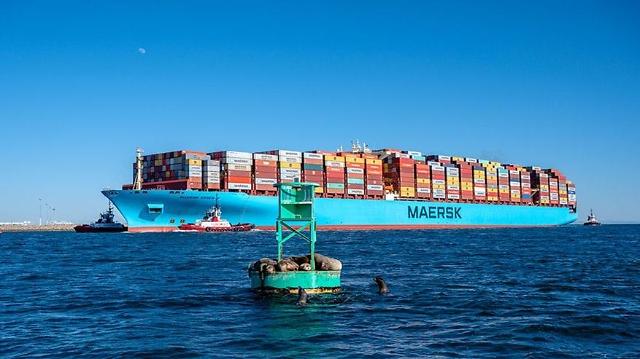 SEOUL -- A containership operated by Maersk, a Danish integrated shipping company, has lost up to 750 containers overboard in the Pacific Ocean en route to the port of Los Angeles, according to WK Webster, a cargo casualty management firm.

En route from Xiamen, China to Los Angeles, Maersk Essen, a Danish-flagged 13,100 twenty-foot equivalent unit (TEU) ship, spilled up to 750 container boxes into the Pacific Ocean during severe weather on January 16, WK Webster said in a report posted on its website. "The incident occurred whilst the vessel was on passage from Xiamen, China to the port of Los Angeles, USA, reportedly during severe weather."

"It is reported that up to 750 containers may have been lost overboard and it is therefore also very likely that some containers will have collapsed or been damaged in the affected stacks, but remain on board. These containers will need to be removed or repositioned," the report said.

Maersk Essen is scheduled to arrive in Los Angeles as early as January 22, it said, adding arrangements would be made for a survey to investigate the damage and check cargo. The marine claims consultancy company said that Maersk Essen's schedule beyond Los Angeles is almost certain to be delayed.

The incident took place about two months after One Apus, a Japanese-flagged cargo ship, en route to Long Beach suffered a massive container stack collapse after it encountered heavy weather conditions near Hawaii. The carrier confirmed that 1,816 boxes were lost overboard including 64 dangerous goods boxes.