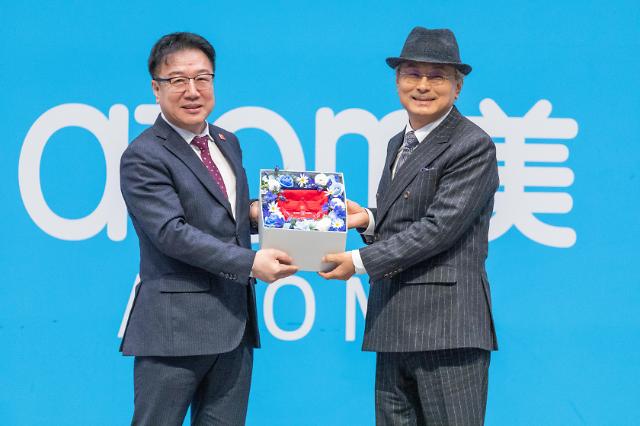 SEOUL -- South Korea's direct selling company Atomy was selected by the Seoul branch of Great Place to Work, a global organization that promotes good workplace culture, as one of the top 100 best workplaces in the country.

"By creating a synergy of principle and innovation, we will become a company which everyone wishes to work at," Atomy Chairman Park Han-Gill said during a Great Place to Work (GPTW) award ceremony that was held online on January 28. The chairman was also selected as one of 24 most-respected CEOs in South Korea. Chairman Park and Atomy's People & Culture team manager Choi Yun-hyuk were also included in the list of top 25 innovative leaders.

GPTW selects good workplaces and their innovative workers in some 70 countries including South Korea, Japan, the United States, and European countries every year to promote healthy and innovative workplace cultures. Atomy was given high points for its reliable management and work efficiency.

Atomy's reliable management is the brainchild of Chairman Park's work philosophy. Park believes that work principles are something that cannot be reasoned with. Executives' promises must be kept. The trust between the company's executives and workers is created when words are kept. Atomy being selected by GPTW shows the strong trust-based relationship between Atomy workers.

Chairman Park emphasizes that innovation is the key point of the company's management. He claims that simple repetitive work must be digitally automated while employees focus on tasks that require innovative thinking. The decision-making process was minimized and workplace environments were modified to boost the creativity of workers. Atomy workers come to work whenever they wish to, and they sit wherever they wish to.

Park's work philosophy was reflected on Atomy Park, the company's headquarters building. Park insists workers play until they get tired. When they are tired of playing, then it's time to work. "Atomy Park is a place where employees work and play," the company said.

The company's People & Culture team leader Choi plans to upgrade the company's work culture to the next level by turning employees into individual platforms with unique capabilities. By doing so, workers can hone their work skills and help other colleagues upgrade their skills.