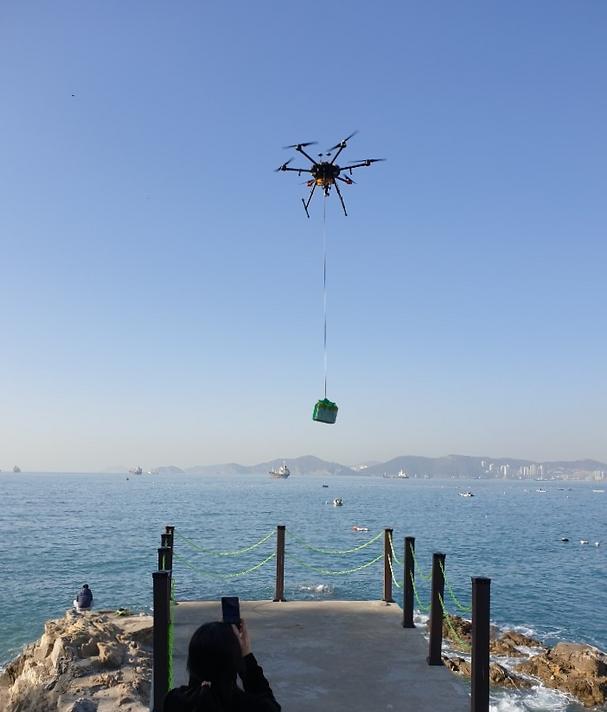 SEOUL -- South Korea's first commercial drone delivery service began in the southern port city of Busan to carry lightweight parcels from docks to ships. For a short-distance service, drones were allowed to carry SIM cards, documents, hygiene products and necessities to a ship anchored about two kilometers (1.24 miles) away.

This is the first time that a business license has been issued for commercial drone delivery in South Korea, according to the Ministry of Land, Infrastructure and Transport. Marine Drone Tech was allowed to provide a port-to-vessel drone delivery service in Busan from February 24.

For security and safety reasons, South Korea has been cautious in introducing drone delivery services. Delivery services have been demonstrated to carry parcels containing medicine to remote villages on islands and hard-to-reach places such as the mountains.

"The commercialization of a business specifically targeting a niche market is relatively small, but it holds a significant meaning as the service is South Korea's first paid drone delivery service," Kim Sang-do, a ministry official in charge of aviation policy, was quoted as saying. He said the government would work out guidelines to help expand service areas.

Previous port-to-vessel delivery services using small boats in Busan took an average of 40 minutes and some 400,000 won ($360) was charged per run. The new service takes about five minutes for 50,000 won.

South Korea released a roadmap in 2019 to popularize drone-related services and designated regulation-free zones for the development and testing of drones. The government has proposed a "K-Drone" control tower system that will manage the flight path and schedule of low-altitude drones. The system is vital for the safe, automated operation of drone services in low-vision situations.