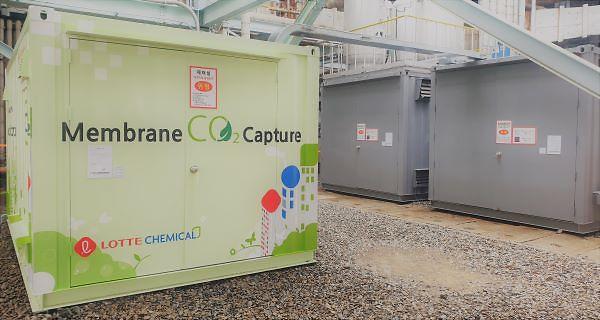 Carbon dioxide can be captured directly from an industrial source by using a variety of technologies. Normally, CO2 is captured from large point sources for storage in an underground geological formation. The aim is to prevent the release of large quantities of CO2 into the atmosphere from heavy industry and limit climate change.

A demonstration facility has been installed at Lotte Chemical's plant in the southern industrial port city of Yeosu. The company said it would operate a commercial facility by 2023 after collecting data and evaluating the effects of Nitrous Oxides (NOx).

Lotte Chemical would capture more than 60,000 tons of CO2 a year and use it as a polycarbonate raw material for the production of dry ice and semiconductor cleaning liquid. The company aims to utilize more than 200,000 tons of CO2 annually by expanding related facilities to other factories.

Lotte Chemical has tied up with Airrane to acquire core technologies. Airrane's gas separation membranes are very fine hollow fibers through which different mixtures of gases are fed in a process called selective permeation. It is an asymmetric filter made of various types of polymer.

"It is meaningful as we can draw changes for carbon neutrality with domestic technology to actively respond to global environmental regulations," Hwang Jin-gu, CEO of Lotte Chemical's Basic Material Business, said in a statement on April 8.

Carbon emissions trading allows companies to buy or sell government-granted allotments of carbon dioxide output. Polluters having more emissions of carbon can purchase the right to emit more, while those having fewer emissions can sell the right. South Korea has tightened carbon emissions obligations to achieve net-zero CO2 emissions. A government roadmap calls for the reduction of annual greenhouse gas emissions to 536 million tons by 2030.

In March, SK Innovation and SK Energy joined REALISE, an EU-funded carbon capture project, to explore opportunities for their entry into the overseas market for carbon capture and storage (CCS), which is the process of capturing waste CO2, transporting it to a storage site and depositing it where it will not enter the atmosphere. REALISE develops a way to capture up to 90 percent of CO2 from multiple sources in operating refineries at a cost that is 30 percent lower than existing capture methods.