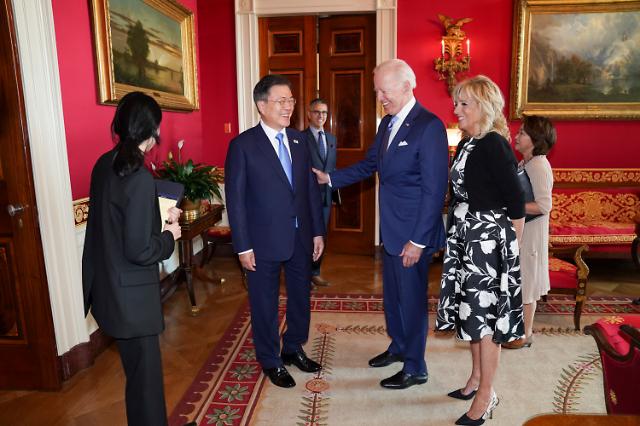 
SEOUL -- South Korea was apparently unafraid of a potential backlash from China in securing U.S. consent on the termination of a 42-year-old missile pact to push for the free development of long-range weapons that could destroy inland targets across the Yellow Sea. The ostensible reason was an ever-growing international race to develop space technologies.

It was attributable to a U.S. strategy to check China and establish a triangular security alliance as deterrence against Beijing. As a result of summit talks between U.S President Joe Biden and South Korean President Moon ae-in on May 22, Seoul took off fetters that have restricted missile development.

"We have the leverage to make a deal against China and Russia," Lee Sang-man, a professor at the Institute for Far Eastern Studies, told Aju Business Daily. Seoul signed a missile accord with Washington in 1979. The accord has been revised step by step, allowing Seoul in 2017 to deploy missiles that can fly for up to 800 kilometers (497 miles) with no limit in its payload. In 2020, Washington allowed Seoul to use solid fuels for space rockets.

"China has never been considered in this process," First vice foreign minister Choi Jong-kun said in a radio interview, referring to South Korea's long-held dream of realizing missile sovereignty which showed persuasion due to an arms race in Northeast Asia. North Korea has tried to take the upper hand in extending the range of missiles, while South Korea focused on guided systems and precision strike.

Some experts expressed worry about retaliatory steps as Beijing did in 2017 over the deployment of an advanced missile shield by American troops in South Korea. Seoul and Washington said the shield was aimed at monitoring North Korean missiles, but Beijing insisted it would "seriously" hurt China's strategic interests and the security balance in Northeast Asia. Theoretically, a powerful American radar system can monitor Chinese missile movements.

"The Biden administration's alliance-oriented diplomacy is acting like the back and forth of the coin," Kim Ki-jung, president of the Institute for National Security Strategy in Seoul, told a seminar on May 24. He said that South Korea is now under growing pressure to choose between the policies of Washington and Beijing, posing a threat to South Korea's survival and prosperity strategy based on security ties with Washington and trade with Beijing.

South Korean Defense Ministry spokesman Boo Seung-chan gave a clear-cut excuse at a regular press briefing. "I don't think it's something to proceed by surveying the influence of neighboring countries. We believe it reflects our national capabilities, status and trust as an exemplary non-proliferation country internationally."

South Korea has built diesel-electric submarines with technical help from Germany’s Howaldtswerke-Deutsche Werft. The first 3,000-ton submarine, unveiled in 2018, can sail at a maximum speed of 37 kilometers (23 miles) per hour with about 50 people aboard and operate underwater for 20 days without surfacing. A second 3,000-ton submarine was launched in 2020.

South Korea aims to deliver a 3,600-ton diesel-electric submarine installed with lithium-ion batteries in 2026. The next target is a 4,000-ton submarine. The defense ministry has maintained a task force related to a nuclear-powered submarine. The necessity of developing a nuclear submarined gained attention after North Korea tested a new-type SLBM in 2019.

Kim Hyun-chong, a special presidential advisor for diplomacy and national security, hailed the termination of a missile accord between Seoul and Washington as a good chance to build "an unblinking eye that monitors the skies over the Korean Peninsula 24 hours a day." "We can launch military reconnaissance satellites anytime, anywhere in the near future," he said.

South Korea has developed a cruise missile with a range of 1,000 km. In 2020, the Hyunmoo-4 missile with a range of 800 km and a warhead weight of two tons was test-fired for combat deployment. Other advanced weapons in use included the Korea Tactical Surface-to-Surface Missile (KTSSM) with a range of over 120 km that is a new type of ballistic guided missiles known as artillery killer because it penetrates underground targets with its powerful warhead.

Satisfied with its technological advance in missile capabilities and guided systems, South Korea has expressed its desire to join an arms race among major powers such as the United States, China and Russia in developing hypersonic missiles, which are too fast to be intercepted by any current missile defense system.