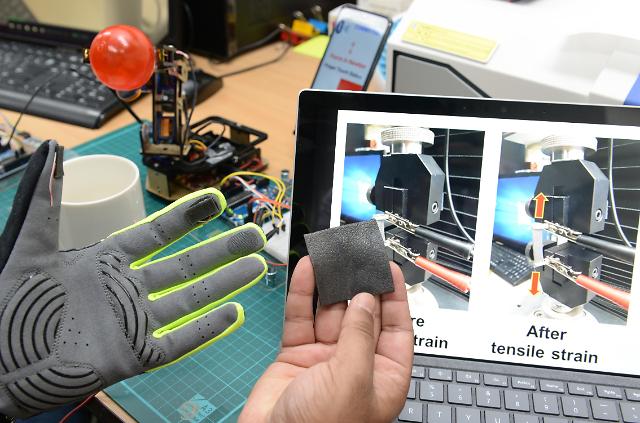 SEOUL --  A South Korean research body has developed a flexible film-like sensor made of composite materials that can withstand heavy radiation and detect differences in pressure and temperature. The sensor can be used in the production of robots capable of carrying out scout missions inside a radioactive zone. Researchers predict commercialization in two years.

Radiation emitted by radioactive materials can damage living organisms and cause cancer or genetic damage. Strong radiation can spoil electronic devices. Robots were destroyed by radiation inside nuclear reactors in Fukushima, the zero ground of Japan's 2011 nuclear disaster, when they were attempting to locate and remove melted radioactive fuel rods.

For protection from radiation, materials with high atomic numbers such as lead or depleted uranium are used to make thick plates that shield personnel and machinery. Sensors and chips attached to a suit or a robot have heavy lead shields. A radioactive suit made of fabric and carbon-lead composite material weighs about five kilograms.

The state-funded Electronics and Telecommunications Research Institute (ETRI) said in a statement on June 2 that researchers have developed a flexible film-like composite sensor made of materials including graphene, Mxene, a two-dimensional ceramic material, and Ecoflex, a rubber-like bioplastic material.

"By utilizing the sensor's superb capability to shield electromagnetic waves, we hope that people will work safely and conveniently in an environment with a lot of electromagnetic interference," ETRI researcher Choi Chun-ki was quoted as saying. Because the sensor is flexible, it can be used as a patch adhered to a suit or other devices.

ETRI said that the new sensor does not physically and chemically react to high doses of radiation. It has been tested at a Korea Atomic Energy Research Institute (KAERI) lab in Jeongeup some 220 kilometers (136 miles) south of Seoul. When the sensor was dosed with 20 kilograys of radiation using cobalt-60, a synthetic radioactive isotope, for 24 hours, it remained operable.

The sensor can be used for blocking off electromagnetic waves, making it ideal for use in 5G communication devices, autonomous vehicles, and aerospace machinery. "This sensor will become useful in the fields of military and smart devices," ETRI said.