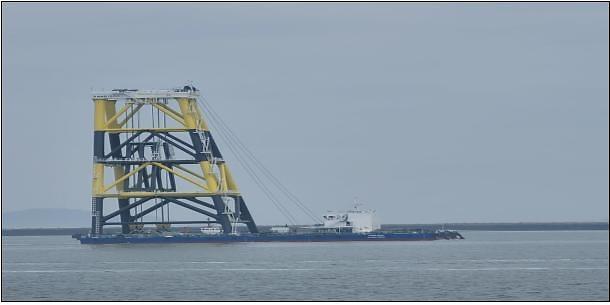 SEOUL -- A specially designed vessel developed by South Korea's state power company for the quick installation of offshore wind power platforms was launched at the southwestern port city of Gunsan. It can lift and transport a heavy and high structure weighing up to 1,500 tons.

An offshore wind power platform consists of a turbine on the upper deck and an underwater support structure. Korea Electric Power Corporation (KEPCO) said the two parts can be assembled in a port for transportation by a multi-purpose mobile base called "KMMB 1500," which was launched in a ceremony in Gunsan on July 7.

KEPCO said the special vessel can reliably lift and transport structures of up to 1500 tons and 140 meters in height. The state electric utility said that KMMB 1500 could shorten the period of installing an offshore wind power platform by 80 days. KEPCO CEO Chung Seung-il hailed KMMB 1500 as "a feat that even Europe, which leads offshore wind power generation, has not achieved."

Compared to a current construction method that requires rock excavation and the injection of cement, KEPCO used a suction pump to discharge water inside the pile and put the foundation into the ground utilizing the pressure difference. It takes only 10 to 13 hours to insert the substructure, and there is no need for cement hardening.

KMMB 1500 can install a 5MW offshore wind generator in 10 days. KEPCO would use its new technology and equipment for the construction of big offshore wind farms in South Korea as well as multi-purpose marine works such as the installation and dismantling of small offshore wind power structures and weather towers.