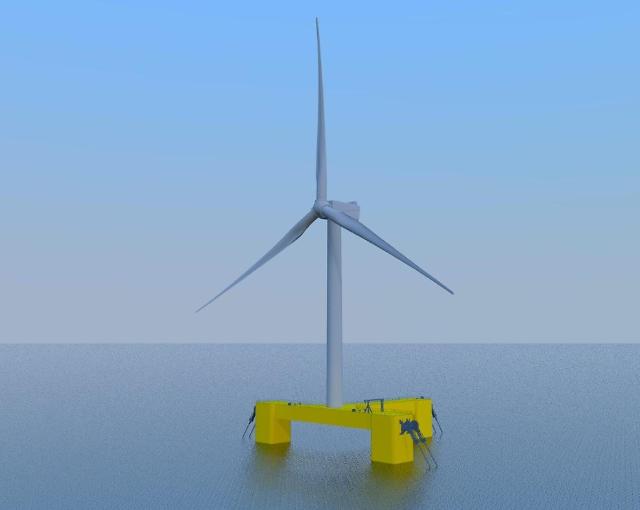 SEOUL -- The basic design of an offshore wind turbine floater developed by Samsung Heavy Industries, a major shipbuilder in South Korea, has obtained certification from DNV, an international accredited registrar and classification society. The floater is a large structure supporting wind power generation facilities, which are similar in design to semi-submersible crude oil production facilities.

Samsung Heavy Industries (SHI) said its model called "Tri-Star Floor" for a 9.5-megawatt offshore wind turbine has acquired "Approval in Principle" from DNV. The shipbuilder said Tri-Star Floor has shortened the construction period from production to transportation and installation with a compact design by eliminating the pontoon iron structure that supports wind turbines.

SHI said that more than 40 years of data on the strength of winds and currents and the depth of water off the east coast were analyzed to ensure stability in any marine environment. "The offshore wind floater means that Samsung Heavy Industries will expand its capacity to carry out large-scale marine plants to the renewable energy sector," SHI's offshore business division head Lee Wang-geun said in a statement on July 19.

The southeastern industrial port city of Ulsan has pushed for a major floating wind farm project in line with a government campaign to step up the use of wind, solar and other types of renewable energy. The Seoul government has called for the localization of technologies related to floating offshore wind farms by 2025.

In April, SHI acquired original technologies for the construction of a wind turbine installation vessel (WTIV) featuring eco-friendly technologies. The vessel is designed for the installation of offshore wind turbines. The design of SHI's WTIV concept has obtained "Approval in Principle" simultaneously from three major maritime classification societies -- the American Bureau of Shipping (ABS), DNV, and Lloyd's Register (LR).