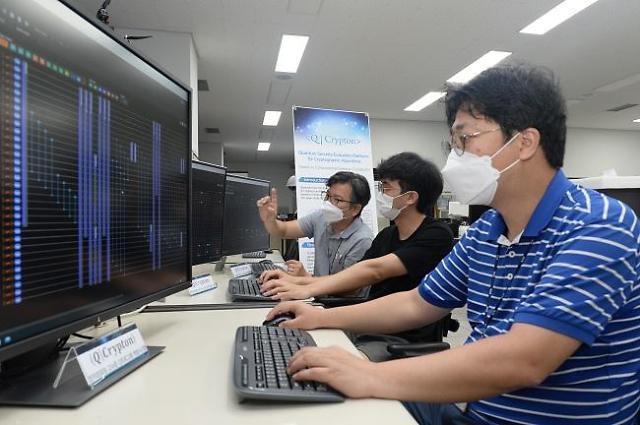 
SEOUL -- A state research body in South Korea has developed an innovative platform capable of verifying encryption technologies that prevent the hacking of quantum computers. It would accelerate efforts to find cryptographic algorithms with higher security in preparation for the era of quantum computers.

The Electronics and Telecommunications Research Institute (ETRI) said that the new platform called "Q Crypton," unveiled at an online conference on July 21, can verify the quantum safety of various cryptographic systems such as RSA, which is a public-key cryptosystem that is widely used for securing data transmission, and next-generation quantum-resistant passwords.

Q Crypton laid the foundation for verifying cryptographic algorithms and the performance of programs that will be used in quantum computers, ETRI said, adding the platform would be released step by step through a web browser to prevent hacking using quantum computers.

"The fear of incapacitating modern public key cryptography with quantum computers is coming to reality. Based on the world's best technology in cryptographic quantum safety, we will work hard to establish next-generation security infrastructure early," ETRI's cybersecurity research division head Kim Ik-kyun said in a statement on July 21.

Q Crypton platform can analyze and simulate the quantitative safety of passwords more accurately as it can consider various factors such as different qubit sizes, quantum computer chip structures, and an error rate. Because the platform is equipped with visualization programming technology and a library of key computations for encryption, it is possible to develop quantum algorithms needed for encryption quickly and efficiently.

ETRI said the platform schematized quantum circuits so that numerous and complex formulas can be seen intuitively at a glance and shortened so that they are not inputted one by one. the platform provides the language processing of quantum algorithms, verification using virtual machines, and a function to analyze the amount of quantum resources.