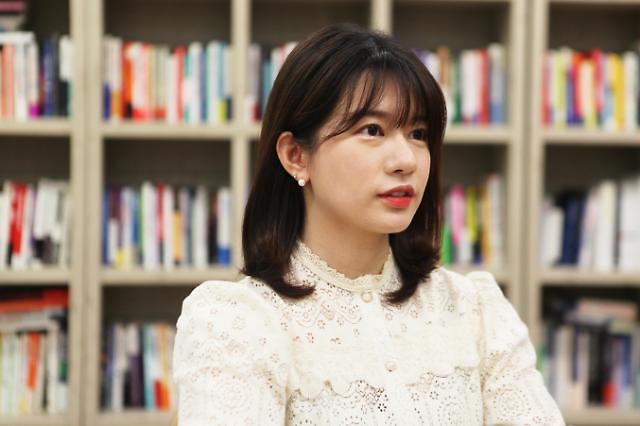 Japanese idol Miyu Takeuchi speaks about her experience in South Korea during the interview with Aju Business Daily on September 1 [Photograph by Yoo Soo-min = parasol@ajunews.com]

SEOUL -- Miyu Takeuchi's endless desire to live her life doing what she wishes has captivated the Japanese singer since she participated in a child model contest at an amusement park when she was seven years old. The desire drove her to become a child actress and move on to become a member of AKB48, one of the iconic girl bands in Japan. The 25-year-old had spent nine and a half years on the stage as a member of the country's top idol band.

Suddenly, an opportunity to start her career in South Korea was given to Miyu, who was fulfilling her dream, sprinting towards wherever her heart pointed at. She was given a choice whether she would participate in "Produce 48," a music audition program co-created by entertainment agencies from South Korea and Japan. It was a path which she had never walked before. She would be evaluated in a foreign country. However, the fear of starting a new career in a new country could not stop her desire.

"It is nice to meet you," Miyu said in fluent Korean at the beginning of her interview with Aju Business Daily in early September. It has been three years since she started her career in South Korea after Produce 48. The Japanese singer does not have a management agency, but she hopes to stay in Seoul for a while as she believes the fastest way to meet global fans through music lies in South Korea.

Despite the fact that the singer showed little confidence in speaking Korean, it was clear that Miyu had a good understanding of the language. Translations were needed only occasionally when difficult Korean words popped up. She unraveled stories about her life and K-pop in a calm voice with eyes glittering with curiosity.

For celebrities, it is not easy to live in a different country as the process involves the complete transformation of living environments including her main spoken language, culture and relationships with other people. Maybe because Miyu is already a veteran who started her career at the age of seven, moving into South Korea was not too hard, she said, adding support from her parents prompted Miyu to move on and start a new career.

"I have always wondered what makes my fellow South Korean artists so talented even though we all work in the same entertainment industry."

It was 2013 when Miyu strongly recognized the presence of K-pop for the first time through Girls' Generation and other K-pop girl bands that overwhelmed Japan with extravagant and delicate performances. Miyu was shocked as South Korean girl bands showcased totally different characteristics from their Japanese counterparts.

The flawless dance and unfaltering live singing skills of K-pop bands were aspects that were not required from Japanese bands. When Miyu was active as an AKB48 member, Japanese idols had to look just cute and naive to fans. "At that time in Japan, it did not matter whether you can sing or dance. The popularity of an idol mainly depended on your character and cuteness than talents."

In the eyes of Miyu, South Korean idols were at "completely different levels." "As a Japanese idol, I came to respect South Korean idols after witnessing their professional performances," she said. During the time of her wonder, Miyu was given an opportunity to participate in Produce 48. The singer thought that South Korea would be an ideal stage for her to nurture her skills for the global stage.

"It was not hard to make the decision to move to another country. I thought 'it's time for me to go to Korea.' Maybe it was because I was dreaming of starting a new career in another country all the time," she said. For Miyu, 2018 was a big turning point in her life. Her appearance in Produce 48 created an opportunity for fans from South Korea and Japan to find a new Miyu. Her talent in singing, piano, guitar, trumpet and composing stood out.

After her competition at Produce 48, Miyu returned home, but she decided to "graduate" from AKB48 and move back to South Korea in 2019. Her desire for music motivated her to come to South Korea. Before coming to South Korea, her anxiety has built up in her heart as she always thought about her life after AKB48. As a Japanese idol band member, it was not easy to seek new paths in her career as she had to compete in monthly events to join the list of main members. 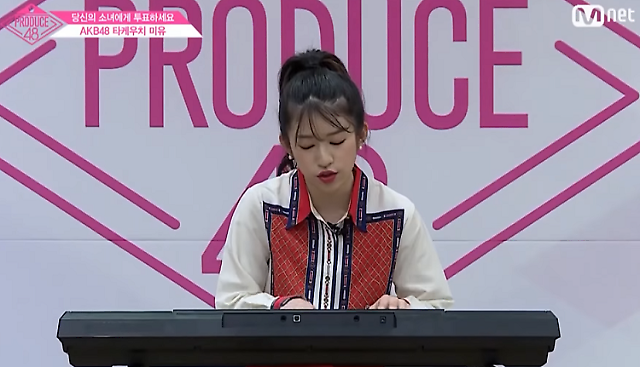 Miyu had always thought about whether she should go solo or find a new career. With a strong wish to go solo, she wished to stand proudly and show off her talent not only in Japan but also on the global stage. For Miyu, South Korea was a special, attractive stage and a place to lay a stepping stone to the global music scene by honing her skills through the systematic K-pop scene.

"Actually, any Japanese idol would say 'if you wish to go global, just go to South Korea.' Everyone in the entertainment industry would feel the same. Even internet critics would say that 'if you pursue a career only in Japan, it's very hard to go global in the future.'"

K-pop is considered a preparation platform for the global stage because the Japanese music industry, which had bloomed in the late 1990s and early 2000s, lost much of its know-how, said Miyu.

Japan used to be the second-largest music market in the world after the United States since the International Federation of the Phonographic Industry (IFPI) started releasing the Global Music Report in 2002. However, Japan's industry has gotten to only focus on domestic demands by relying on the domestic market for profit.

Now, Japan sees K-pop as a platform that has adopted various music styles to adapt to the global market. The South Korean music industry, affected by its Japanese counterpart, had created ordinary music, but K-pop is now quite different by adopting a hybrid platform that targets different fan groups around the world.

Recently, pop-music industries from South Korea and Japan have started to influence each other. Just like Miyu who grew up in Japan, J-pop was also stimulated by the success of K-pop. Japan's music industry accepts the fact that an idol's talent is more important than cuteness, and female idols are treated better, Miyu said, adding she was surprised by the performances of her junior AKB48 members.

"South Korea and Japan have their own strong points and I think the two countries should share their strengths and grow up together and become closer to each other."

For the last two and a half years, Miyu has honed her skills and was able to set up realistic plans and fulfill her dream while going through systematic training for singing, dancing and acting. But the singer confessed that she felt burdened by something that she did not recognize during her life in Japan.

"There are so many things I have to do on my own and more energy had to be spent. There were so many tasks to be done than I have expected. In Japan, when you sign a contract with an agency, you can make a debut right away. However, in South Korea, you should invest time and efforts for preparations to become active even though you have already debuted."

Miyu's joy and excitement over her achievement were huge because she threw everything into it. She said that the moment which she felt 'It's finally done! I now have my own album! I can show it to everyone!' was one of the happiest moments of her life in South Korea. Now she has music she likes and wishes to do. She wants to better "Miyu's music" and thinks that an artist is able to pursue a long-lasting career only when she has found her own color and music styles.

It is true that restarting her career in South Korea was not so easy. She was lonely at first, sometimes talking to herself that she should refrain from being too lonely. Miyu became skeptical about her decision when relations between Seoul and Tokyo were not good. Her skepticism got greater when her career did not work out very well due to a coronavirus pandemic.

Miyu thinks that if she stayed in Japan, she would have been much different from now with less trust and confidence in her talent. "Of course, the life in South Korea is sometimes very tiresome. But now I do not feel lonely at all and it surprises me. I have learned to lead my own life. I definitely feel that the things I learned here would help me in the global scene."