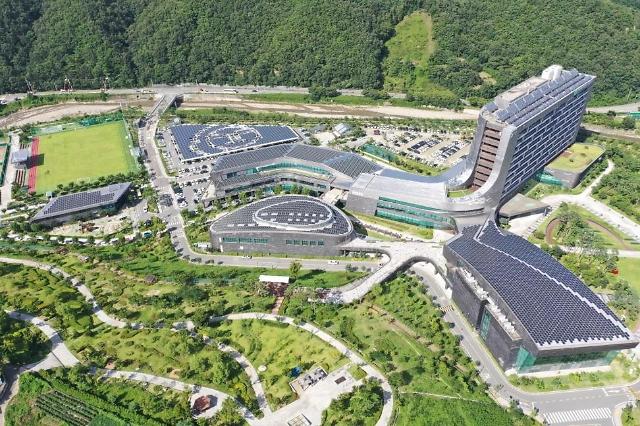 SEOUL -- Korea Hydro & Nuclear Power, the state operator of nuclear power plants, has built a 1.3 megawatt-class solar power plant on the rooftop of its headquarters building in Gyeongju some 270 kilometers (167 miles) southeast of Seoul. The power plant built on rooftop idle spaces will generate electricity that can power about 1,300 households.

"We will continue to build renewable power plants such as solar and wind power plants in regions that have no burden of environmental damage and social costs," Chung Jae-hoon, president of the KHNP, was quoted as saying.

South Korea has focused on turning various infrastructures into environmentally-friendly power generation venues to make the country greener and save space. Seoul City is offering subsidies to support building and house owners who wish to install solar power panels on the rooftops and walls. In January 2021, a 12 kilowatt-hour-class solar power plant was also built on Olympic-daero, an eight-lane expressway that interconnects southern districts in Seoul. The expressway opened in 1986 was left without being used after it slightly changed its course.

Hanwha Q Cells, the solar cell-making wing of South Korea's Hanwha Group, is leading a 96 billion won ($86 million) project to build 60 megawatt-class solar power facilities on factory roofs and idle spaces in the southern industrial city of Pohang by partnering with Korea East-West Power, a state power generation company.
© Aju Business Daily & www.ajunews.com Copyright: All materials on this site may not be reproduced, distributed, transmitted, displayed, published or broadcast without the authorization from the Aju News Corporation.