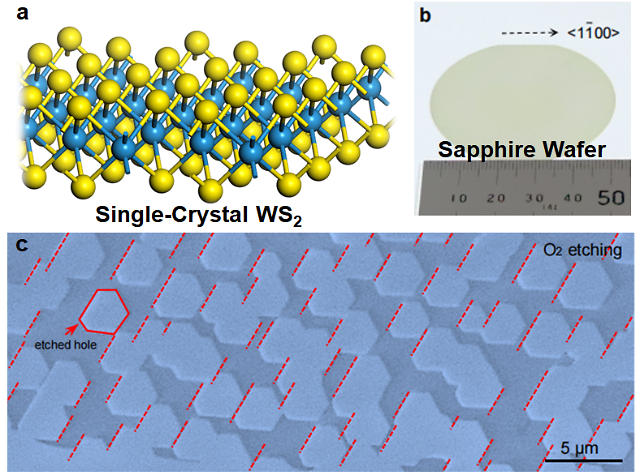 SEOUL -- Researchers have proposed a new mechanism that can become a game-changer in the semiconductor manufacturing industry. The single-crystal wafer-growing mechanism could provide a solution for the mass production of transition metal dichalcogenides regarded as next-generation semiconductor substrate material.

Silicon in a single-crystalline form is commonly used as the main material for semiconductor substrates (wafers) because it is one of the most common elements. It is also very easy to manufacture and manipulate. However, silicon-based semiconductor manufacturing has reached its technological limit, making it harder for wafer producers to further increase the performance of chips.

The Institute for Basic Science (IBS) said in a statement on November 16 that a research team led by Professor Feng Ding from the Center for Multidimensional Carbon Materials (CMCM) collaborated with researchers from Peking University (PKU), Beijing Institute of Technology, and Fudan University, to find mechanisms that affect TMDs to grow into a large-sized single-crystal structure.

"This new dual-coupling epitaxy growth mechanism is new for controllable materials growth. In principle, it allows us to realize to grow all 2D materials into large-area single crystals" if proper substrates are available, Ting Cheng, a member of the joint research team, was quoted as saying.