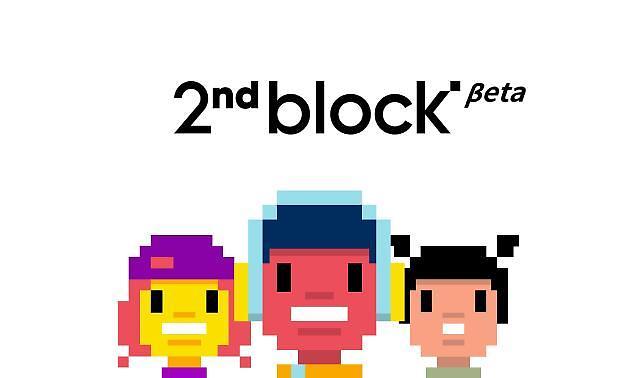 SEOUL -- A new metaverse platform installed with video call functions was released by South Korea's leading blockchain company Dunamu to help bridge the gap between online and offline spaces. Users can go anywhere using avatars and video calls are connected when avatars get closer. An open beta service is available from November 30 on desktops.

Dunamu has unveiled "2ndblock," saying it is South Korea's first metaverse platform using video transmission technology to maximize the scalability in real life. A metaverse is a virtual world that can be accessed using smartphones, PCs, or virtual reality headsets. Each user is represented by a personalized character called "avatar."

Users can create a virtual space called "block" and have real-time meetings. Depending on their concept and purpose, they can open various blocks for private gatherings, university lectures and business meetings. Music performances can be organized and showcased in public using the platform's loudspeaker function.

Because 2ndblock uses a 2D-based user interface, anyone can easily control their avatars and explore the virtual world. Anyone can easily understand it without separate learning or complicated procedures, and even those unfamiliar with digital devices can enjoy it due to simple use methods. Up to 1,000 people can access a block. Anyone can hold an open meeting and invite other members.

Some 20 types of avatars are available in 2ndblock, which offers five preset blocks designed for each purpose including party rooms and auditoriums. In six personal blocks, individual users can create customized spaces. Multiple users can gather to communicate or enjoy games together in four public blocks. Without creating a separate account, users can gain access using Google, Kakao, Apple, and Facebook accounts.

Dunamu aims to launch the platform's official service in the first half of 2022. A mobile app for 2ndblock will be created. The company known for non-fungible token (NFT) technology has attracted investments from entertainment and other companies. In early November, Hybe, the agency of K-pop phenomenon BTS, created a joint venture with Dunamu to turn the intellectual property of artists into digital assets that can be displayed and exchanged in fan communities.
© Aju Business Daily & www.ajunews.com Copyright: All materials on this site may not be reproduced, distributed, transmitted, displayed, published or broadcast without the authorization from the Aju News Corporation.