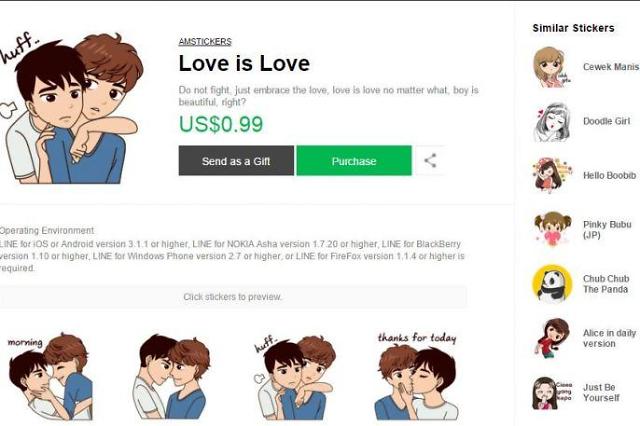 Social messaging app service provider “Line” is to remove LGBT (an initialism which stands for lesbian, gay, bisexual, and transgender) themed stickers from its messaging app.

Indonesia’s Information and Communication Ministry spokesman Ismail Cawidu called on the internet giant to remove the LGBT-themed stickers from its online store. Homosexuality is not illegal in Indonesia, but considering the country’s conservative society, the stickers could offend its users.

According to the tech specialists Engadget, the stickers apparently offended some users, got backlashed for having it for sale in Line’s online store.

Line was quick to act on it. The social messaging service posted on Line Indonesia’s Facebook account apologizing for making its users uncomfortable and promising to remove the offending items in short order.

"At Line, we stick to the global benchmark for screening and filtering of content that is sensitive from the perspective of the local culture,” Line wrote on its Facebook wall. "Line appreciates all the feedback from users and other parties related to the products and features, and we realize how sensitive this matter is and will work hard to ensure that things like this do not happen again."

Indonesia’s Information and Communication Ministry replied by posting on its website. The post praised the company’s quick action. "We appreciate their work in addressing things that could potentially cause public unrest, especially the concerns of mothers of children on the negative influence of LGBT stickers."