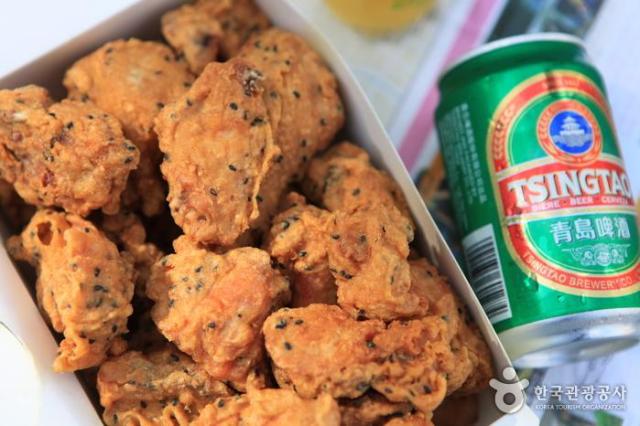 Thousands of Chinese tourists will hold a rare "Chimaek" party with 1,500 fried chickens and 4,500 beer cans this month when they fly together into South Korea's western port city of Incheon on a group tour, city officials said Wednesday.

The chicken and beer party is part of a week-long trip by 6,000 Chinese workers from their company, Aurance, handling health supplement. They will use 158 flights from 24 cities to visit Incheon on a reward vacation from March 27 to April 2.

In Incheon, the Chinese will hold a two-day business conference, coupled with city tours and a group chimaek party in Wolmido, an island which is known as a weekend tourist attraction connected to the mainland by a highway. Wolmido has a theme park and a concert square.

The chimaek party on March 28 will be attended by 4,500 workers, an Incheon city official told Aju News.

"We are making full preparations to greet them," he said, adding 1,500 hotel rooms and 140 buses have been arranged. "This is a good opportunity for Incheon to promote its image, and we hope the Chinese will make good memories here."

Neither fried chicken nor beer originated in South Korea, but a combination of these two overseas imports has become a culturally significant force in drinking culture here.

The chimaek fever has also swept through China, helped by a line from South Korea's fantasy-romance TV drama "My Love from the Star" which became a cult hit in China. Actor Kim Soo-hyun is one of the most popular South Korean actors in China with a huge fan following for the role of an alien on the show.

"The chimaek party is being organized by the Chinese company, apparently inspired by the drama in which actress Jun Ji-hyun was seen eating fried chicken along with beer," the Incheon official said.

Xinhua, China's state news agency, once hailed the TV drama and the chimaek trend as a driving force in reviving Chinese chicken farms in 2014.