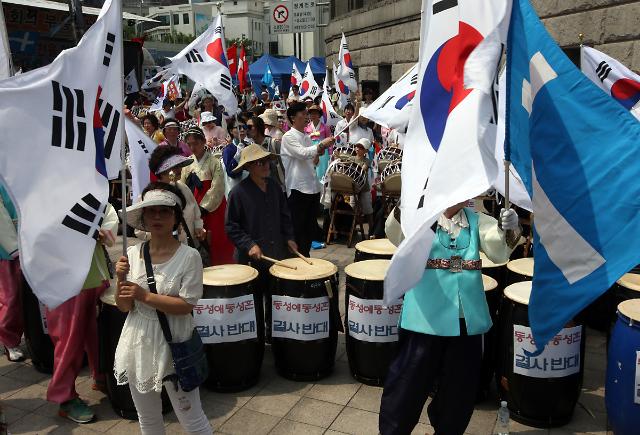 Protestors are protesting against Queer Festival taking place at the City Hall of Seoul, 2015 [Yonhap Photo]

An international women's film festival kicks off in Seoul Thursday, highlighting   lesbianism, sexual slavery and other gender issues through more than 100 films in the run-up to a major Queer festival.

Organizers were to hold an evening ceremony to open the Seoul International Women's Film Festival at the Megabox Sinchon theater that would screen 11 "Queer Rainbow" films portraying the lives and issues of sexual minorities among a total of 118 movies from 27 countries.

The annual festival ends on June 8 ahead of a Queer parade in central Seoul that sparked a fresh legal battle between a sexual minority community and conservative Christian activists over whether to allow such a controversial event.

The opener is "Suffragette" (2015), a British historical period drama directed by Sarah Gavron that depicts a feminist movement in the early 1900s and its brutal oppression. Some six million won (5,042 US dollars) will be awarded to the Grand Prize winner. 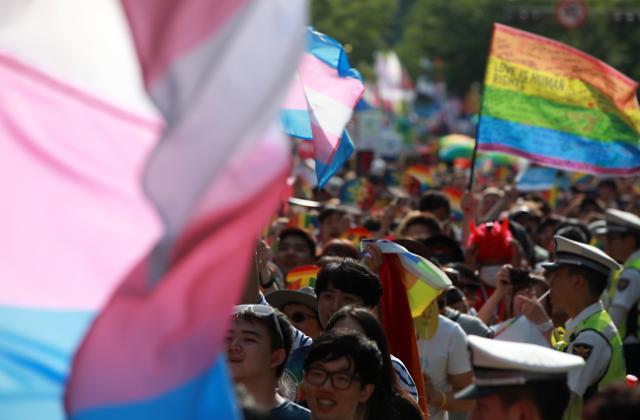 
Films to be screened for the Queer Rainbow section includes "The Girl King (2015)", a period drama that chronicles the true story of Kristina, Queen of Sweden as well as "Troublers" (2015), a documentary addressing the issue of hostility towards the LGBTQ population, and "The Royal Road" (2015), a cinematic essay that rewrites San Francisco in a queer, postcolonial perspective.

"A unique feature of this year's  'Queer Rainbow' that introduces films that embrace sexual diversity and portray the lives and issues of sexual minorities, is its emphasis on high-quality fiction films that encompass a wide variety of genres such as period drama, fantasy, melodrama, coming-of-age story, and comedy," programmer Cho Hye-young wrote on the festival's homepage.

"The queer film industry is transforming and diversifying its genres, to further portray LGBTQ (lesbian, gay, bisexual and transgender) issues," she added.

The film festival comes as a legal battle is under way at a Seoul district court between organizers of the annual Korea Queer Culture Festival (KQCF) and opponents.

At a court hearing on Wednesday, a Seoul citizen surnamed Kim urged the court to ban this year's Queer parade insisting it has created a sense of aversion with "obscene" activities. Organizers argued his allegations were exaggerated because such a scene had been caused by a handful of uncontrollable participants. 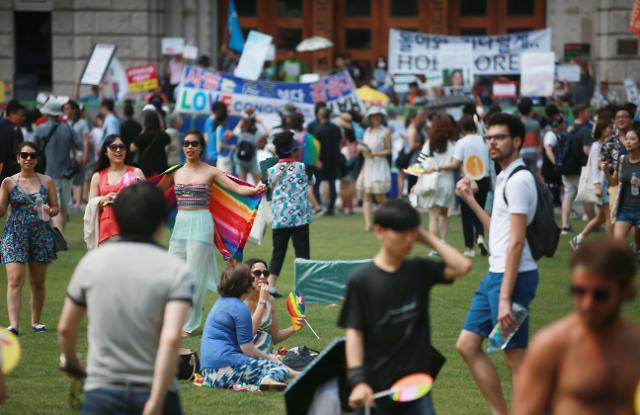 The Queer festival, which began in 2000, now attracts thousands of people in South Korea despite strong and sometimes violent protests by Christian activists seeking to block the parade. Last year thousands of police were mobilized to form a security line between gay participants and Christians who chanted slogans and waved banners condemning each other.

Homosexuality is not illegal in a conservative country where many gay and transgender people keep their sexuality under wraps. In recent years, gay groups have stepped up their campaign to win public support, but last week a court turned down a landmark suit by two male filmmakers -- Kim Jho Gwang-Soo and his partner Kim Seung-Hwan -- to break down gay rights barriers by winning a marriage license.

The Kims held a wedding ceremony in September 2013 and submitted their marriage registration form to their local authority. As same-sex marriage is not recognized in South Korea, the couple went to court to demand legal status as a married couple after a district office refused to recognize it.