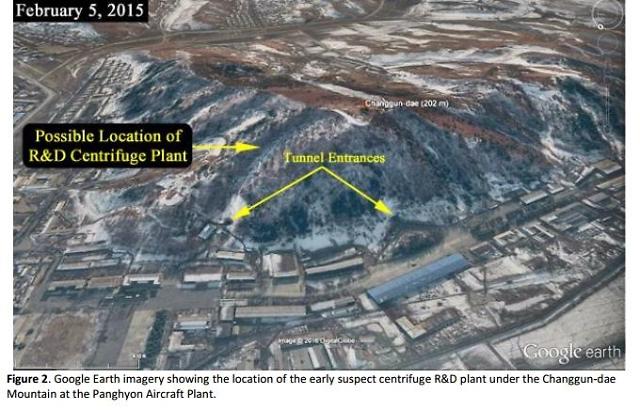 [Courtesy of the Institute for Science and International Studies]

​
North Korea's secret underground facility used in the early stages of uranium enrichment was located at or near an airbase west of the country's main nuclear complex in Yongbyon, according to a US research institute.

The small-scale centrifuge enrichment plant would have served as an important facility in the development of North Korea's gas centrifuge program in the 1990s and early 2000s, said the Institute for Science and International Studies.

The facility was located at the Panghyon Aircraft Plant, at or near the Panghyon Air Base, about 45 kilometers (27 miles) west of Yongbyon, it said, citing knowledgeable government officials.

The institute said the site could have held up to 200-300 centrifuges. "We have no information suggesting that this site continues to function as a centrifuge plant."

Centrifuge research and development activities in North Korea, and possibly at this site, would date back to the late 1990s and early 2000s after North Korea received centrifuge aid from Pakistan, the institute said.

Pyongyang has openly acknowledged an active uranium enrichment program since it quit a six-party forum aimed at freezing its nuclear weapons program. The US institute said that determining the exact location of sites associated with gas centrifuge enrichment is "critical to any future nuclear agreements" with North Korea.

"If negotiations resume and are successful, it will be critical to include all the major North Korean centrifuge plants in any plan for freezing, monitoring, and dismantling North Korea’s nuclear weapons programs."