The exercise involving some 300 K-9 self-propelled howitzers and other guns at 49 artillery units came amid high military tensions following a series of North Korean military threats and missile launches.

It's the first simultaneous exercise involving all front-line artillery batteries, the ministry said. "The sound of gunfire could be heard along the entire border as we are going to send a strong message that our side is ready to retaliate resolutely against any enemy provocations," an army spokesman said. 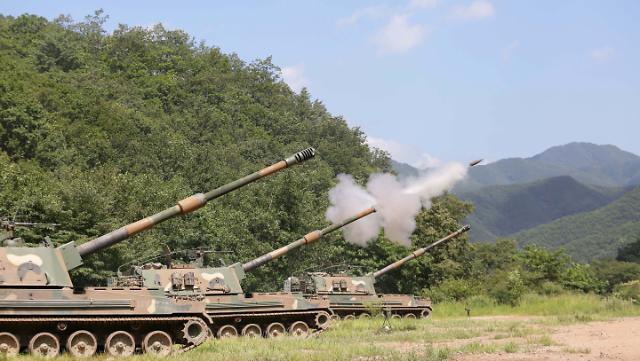 
The exercise has been arranged to mark the first anniversary of a cross-border gun fight. Two South Korean soldiers were severely maimed when a box landmine planted by North Korea blew up in the DMZ on August 4 last year.

The exchange of fire caused no casualties because shells fired by both sides landed short of their bases after flying across the DMZ, a four-kilometer-wide strip of land that has divided the Korean peninsula since an armistice accord ended the 1950-53 Korean War.

The buffer zone was originally set up to be clear of heavy weapons with border guards allowed to use only personal sidearms like pistols for patrolling to prevent any unnecessary clashes. But North Korea has long violated the armistice accord to deploy mortars and large-caliber machine guns as well as landmines in the DMZ, sparking sporadic armed clashes for decades.

This year, North Korea has planted thousands of new landmines in the DMZ to replace old box landmines made of wood or plastic which make South Korean soldiers hard to find with metal detectors.