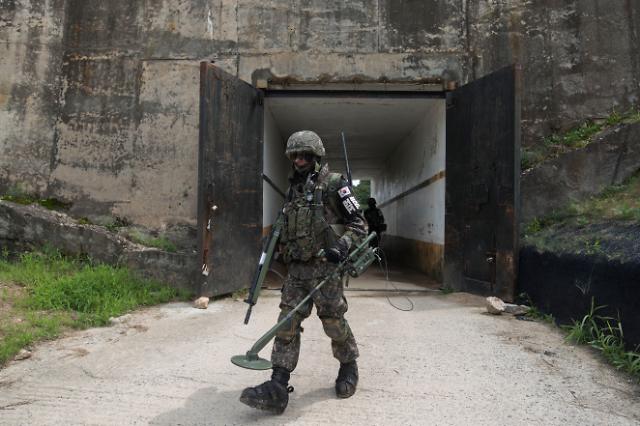 A file picture shows a South Korea soldier  walks out of a concrete gate along the border.[Yonhap News Photo]


A North Korean soldier defected to South Korea Thursday after walking across the heavily armed land border amid high tensions caused by a series of ballistic missile and nuclear tests by Pyongyang, military authorities said.

The unarmed soldier crossed into South Korea at around 10:00 am (0100 GMT) through the central section of the demilitarized zone (DMZ) which has split the Korean peninsula following the 1950-53 Korean War, according to the Joint Chiefs of Staff (JCS).

The defection did not cause any disturbances or cross-border gun fight between South and North Korean soldiers, the JCS said, adding the defector is now under questioning by security authorities.

Defections through the DMZ are rare due to land mines, electric fences, concrete walls and the heavy presence of border guards. The latest crossing by a North Korean soldier was reported on June 15 last year.

The defection followed reports that an 18-year-old North Korean math whiz who sought asylum at the South Korean consulate in Hong Kong has arrived in Seoul.

News outlets in Hong Kong reported that the student left Hong Kong "over the weekend," ending a two-month stay there. The student sought asylum after participating in the International Mathematical Olympiad in Hong Kong.

The teenager arrived in South Korea on Saturday, Yonhap News reported, citing a diplomatic source, adding he had long yearned for a life in South Korea as he had access to South Korean TV and radio programs, living in a place close the inter-Korean border. His father, who is a math teacher, has encouraged him to defect.

To block defections, security agents have been hastily dispatched to flood-stricken areas along the border with China where heavy rains wrecked lots of border facilities such as guard posts and barbed wire fences, the US-based Radio Free Asia (RFA) said earlier.

The North's northeastern border areas were devastated by heavy rains accompanied by Typhoon Lionrock. The United Nations estimates that more than 500 people were dead or missing.

Government data showed that 29,688 North Korean defectors have arrived in South Korea at the end of August, many of them coming through China.

Despite tight border control and surveillance, more North Koreans are seeking to escape their hometowns in the North.

In April, 13 North Korean restaurant workers in the Chinese city of Ningbo defected to South Korea, following by three more in June. In August, Thae Yong-ho, a minister at the North Korean Embassy in Britain, defected to Seoul with his family.