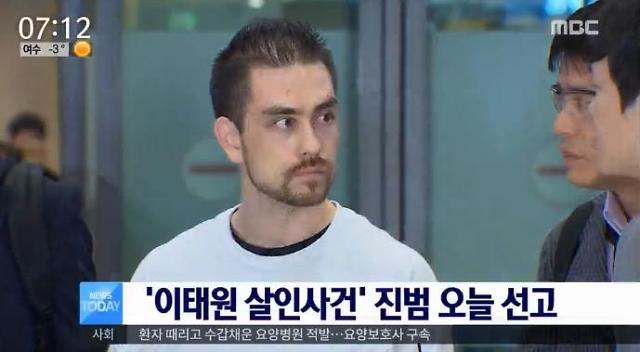 [An image captured from MBC TV]
​

South Korea's highest court upheld a 20-year jail sentence for a US citizen Wednesday with brutally murdering a college student with no apparent motive two decades ago while he was a teenager.

Arthur Patterson, 38, was found guilty of stabbing Jo Jung-Pil multiple times with a knife in a fast-food restaurant toilet in 1997 when he was the 17-year-old son of a US military contractor. He was arrested in Los Angeles and extradited in September 2015 to face trial in Seoul, although he denied his involvement in the cruel crime.

The Supreme Court ruled Patterson deserves harsh punishment for his brutality in stabbing a stranger to death.

In 1998, Patterson was released in an amnesty but became a murder suspect after Lee was acquitted on appeal for lack of evidence. Patterson fled to the United States a year later.

The unmotivated murder triggered a public outcry in South Korea. It was made into a hit movie in 2009, refueling public anger and forcing South Korean prosecutors to reopen the case.